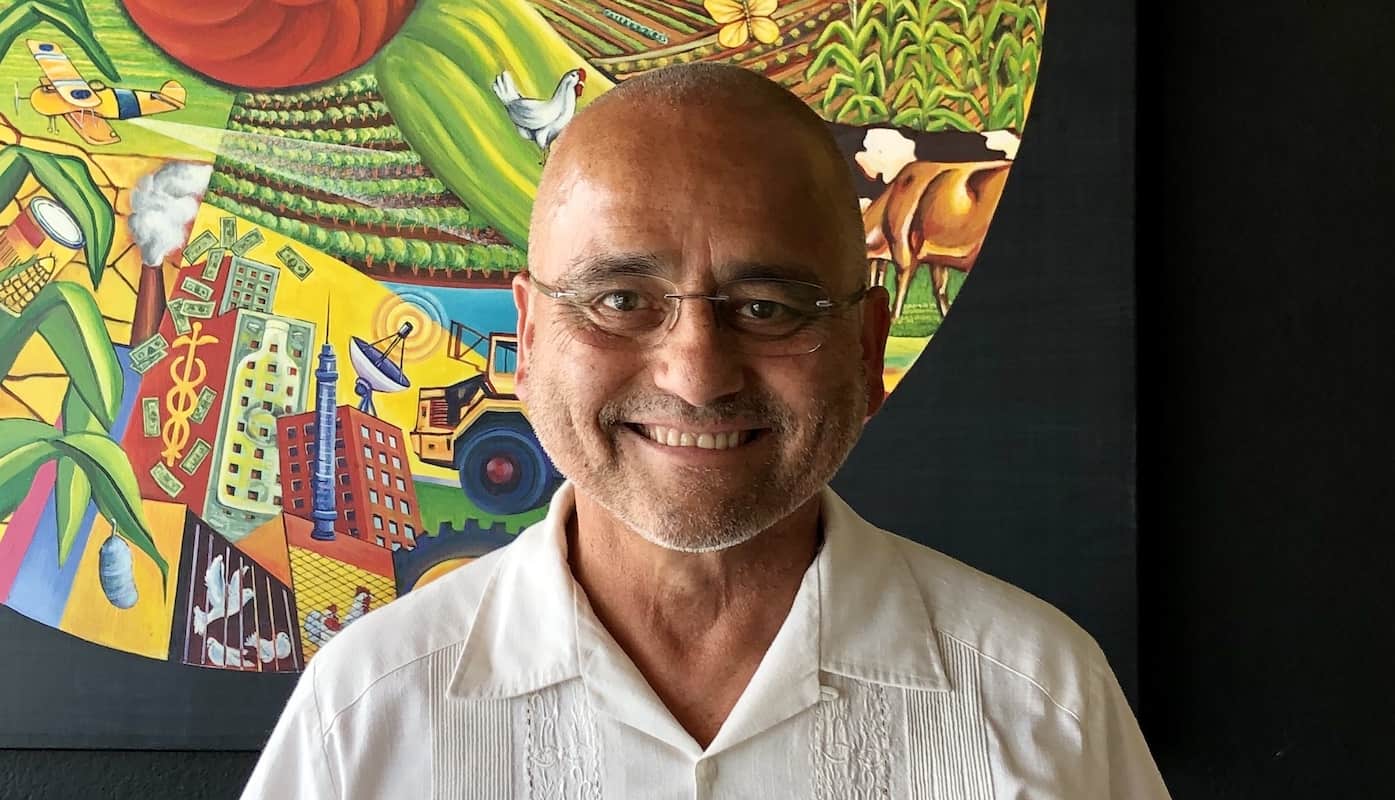 In this installment, we meet Carlos Ortez, owner of Un Solo Sol, serving the Boyle Heights neighborhood of Los Angeles. Carlos discusses the idea that morphed into a restaurant and how he gives back to his community even during a pandemic.

Clover: Thanks for speaking with us today, Carlos. Can you tell us about Un Solo Sol?
Carlos Ortez: The idea for a restaurant was born in 2005, when I launched a food services business. We provided hot meals to schools. Since our schools are so diverse, we introduced a menu of healthy foods from different cultures for the children.

That’s also when we introduced the name Un Solo Sol. It means “a single sun,” or, in a word, unity. You can read a superb narrative about the name, our mural, and my philosophy of life on our website.

The Un Solo Sol mural by Rafael Escamilla depicts the sun and the very beginning of life. That’s why the overall color of the mural is yellow. It shows how life started in balance with nature, how we lost that balance over time, and how we can reclaim that balance by returning to nature. The spiral shapes, the colors, and the images work together to create movement and tell the story beautifully.

Los Angeles is an international city with people and food from all over the world, so our menu borrows from many cultures to create a fusion of delicious and nourishing foods. I’ve infused dishes I enjoy from other countries and cultures into our menu—Lebanon, Mexico, Peru, India, Iran, Libya, and Syria, to name a few.

I’m not a trained chef, but I’m a naturopath who understands ingredients. I believe herbs and seasonal fruits and vegetables strengthen the immune system and create wonderful flavor. That’s why our plates are so delicious and nourishing. I’ve also switched to organic ingredients as much as possible, especially our grains and essential ingredients. For example, the brown rice, black beans, eggs, and masa for our tortillas are all organic. My ultimate goal is to make Un Solo Sol the most healthful restaurant on Earth.

The real message of Un Solo Sol is empowering and developing the community, not just profiting from it. That’s really what we do here: we honor as much as we can the utopia depicted in the Un Solo Sol mural through community involvement.  Social activism has been very important to me since I was very young.

Clover: How did you get involved with naturopathy?
Ortez: I’ve made my living as a registered mechanical engineer in the State of California with environmental consulting companies. This included working for the State of California as environmental regulator until I recently retired. However, it was my second daughter who put me on the path to naturopathy when she was just a baby. At about six months old, she became very sick with congestion. She was given antibiotics, but they didn’t work. She was diagnosed with asthma, but nobody in our family had ever been diagnosed with asthma. I didn’t really buy the diagnosis.

So I took my daughter to El Salvador to visit my mother’s iridologist, Miguel Melendez. After examining her, he gave her herbs that brought up the mucus and brought back the twinkle in her eyes. Within six months, she was a brand new baby.

A year or so later, I went back to that iridologist. He told me I had a problem with my liver that could lead to cirrhosis. I was already experiencing many of the symptoms. At his recommendation, I became a vegetarian and started more healthful eating. I knew close to nothing about vegetarianism or veganism. That was 1992, and almost nobody was talking about veganism then.

So I started studying naturopathic medicine on my own. I found out that much of our health depends on the quality and intake of food. I continued working as an engineer, but learned to read irises and to prepare decoctions that helped my friends and family feel better.

Clover: How did you go from providing food for schools to having a restaurant?
Ortez: In 2004, my ex wife and I bought Plaza Cafe where Un Solo Sol is currently located. Few months later, my ex wife decided that it was convenient to join a non-profit organization, Homeboy Industries, and converted Plaza Cafe into Homegirl Café with them. In 2007, Homegirl Cafe relocated to the headquarters of Homeboy Industries in Chinatown.

In 2008, upon my ex wife’s request, I took over the operations of the kitchen. I didn’t open the front door right away. I initially used the kitchen to continue preparing hot meals for the schools I was already serving. In 2010, many of the local schools were struggling financially, including the non-profit charter schools and high school I had been serving. They simply couldn’t afford or pay for our food services. Sadly, if I had continued serving them, I would have gone into bankruptcy.

So in 2010, I decided to turn Un Solo Sol Food Services into a restaurant. It pained me to leave the school children, but I realized the opportunity to give my healthy food to all of Los Angeles through my restaurant. On October 1, 2010, I opened doors to the restaurant. Although it’s been a struggle, we’ve survived.

Clover: How did you choose Clover as your point of sale?
Ortez: The restaurant kept a low profile for many years, and I was doing most of the bookkeeping by hand. Then we began with a non-Clover POS system because many of the little shops in the area were using it. But with your competitor, I experienced a lot of glitches. I was introduced to Clover through a booth at Restaurant Depot. So I switched to Clover in 2017. At first, I just used it for debit and credit card payments. The following year, I began using the whole system. I especially liked that I could call Clover’s customer service 24 hours a day and reach a technician who could help with any issue I experienced.

Clover: Have you used Clover’s Rapid Deposit feature?
Ortez: Yes, I have. One of the beauties—and limitations—in my restaurant is the variety of ingredients we offer. We can’t afford to run out of any of our specialty ingredients—whether we have a lot of cash in the bank at that moment or not. So, if cash is low, we can deposit the day’s earnings using Rapid Deposit. The cash is available in our account that same day. It helps us avoid overdraft penalties, keep cash flowing, and stock the ingredients we need.

I also like Clover Rewards. It’s helping us build our customer list. Before the pandemic, we had only 25 people signed up. Now, we have close to 300. That’s 300 people I can contact to let them know we’re open and invite them to come join us. To build our list we offer specials like a 15% discount or a free drink for sharing an email address. Our customers really like that, and so do we.

Additionally, I use DAVO Automated Sales Tax to help manage my sales taxes. Before I used it, managing sales tax was a mess. Now, the app collects the sales tax I need to pay for each day of revenue and makes the tax payments for me. I really like it.

Clover: How has Un Solo Sol dealt with the pandemic? What has changed and how have you stayed afloat?
Ortez: One thing that has helped us through the pandemic is Clover Online Ordering. It’s superb. We started using it before the pandemic. We provide descriptions of each menu item and options for customers to choose from. It’s been particularly helpful with social distancing—less contact is part of the protocol we follow. It makes everyone more comfortable. Even if customers are eating al fresco, they can view the online menu and pay right from the app. The ticket prints out on our printer, and we don’t even have to pay a fee for it.

Boyle Heights, where my business is located, has historically been the third poorest community in the LA area. I’ve been tracking numbers for the poorest areas for about three decades. Since the end of 2019, many Boyle Heights businesses were already feeling a crunch. With the pandemic, sales dropped even further. The vast majority of the restaurants that have opened have also seen sales drop 50% or more. Those that have not opened may never open again.

When the pandemic shutdowns hit, I had to let almost everybody go. In the first month of the shutdowns, it was just the cook and I. I had retired as an engineer from the State of California after almost 18 years. My retirement gave me just enough money to survive. So I was able to work as a volunteer at the restaurant. I’m still working as a volunteer because the restaurant is not generating enough for me to take a salary. But I’ve been able to rehire staff to help with the front of the house.

Right now, we’re still counting pennies, but the Payroll Protection Program (PPP) has helped. We were also able to take out a government loan for small businesses that has helped us to survive the pandemic.

Clover: With many small businesses struggling as a result of shutdowns, we’re happy to learn that you’ve been supporting members of the community. Can you tell us about that and how you’re prioritizing that activity?
Ortez: I am a social activist, and I try to live by my principles, my values.

The mariachis have been a part of our community for more than 60 years—even before the Mariachi Plaza was developed in the early 90s. Sadly, nobody is hiring these musicians and artists. Many are probably living on the street now. At the beginning of the pandemic, I gave a 20% discount to all customers on their purchase.  When I noticed there were members of our community clearly more vulnerable than others, I rethought the 20% discount to find a better way to help those who needed it most.

I was able to rehire my second cook who prepared meals for two to three hours each day.  With the second cook, each day that we’re open, we prepared 24 free plates of food for the most vulnerable members of our community. We did that for 12 weeks. We paused the food distribution after the economy started opening more, additional organizations became involved in food distribution, and the necessity decreased substantially. If things become difficult again, we will resume giving plates of food away.

Clover: What advice do you have for other small businesses and restaurant owners?
Ortez: As a small business, you can survive catastrophic times, even when everything seems to collapse around you. Just cling to your communities and hold on to your neighbors. As a community, we will survive.