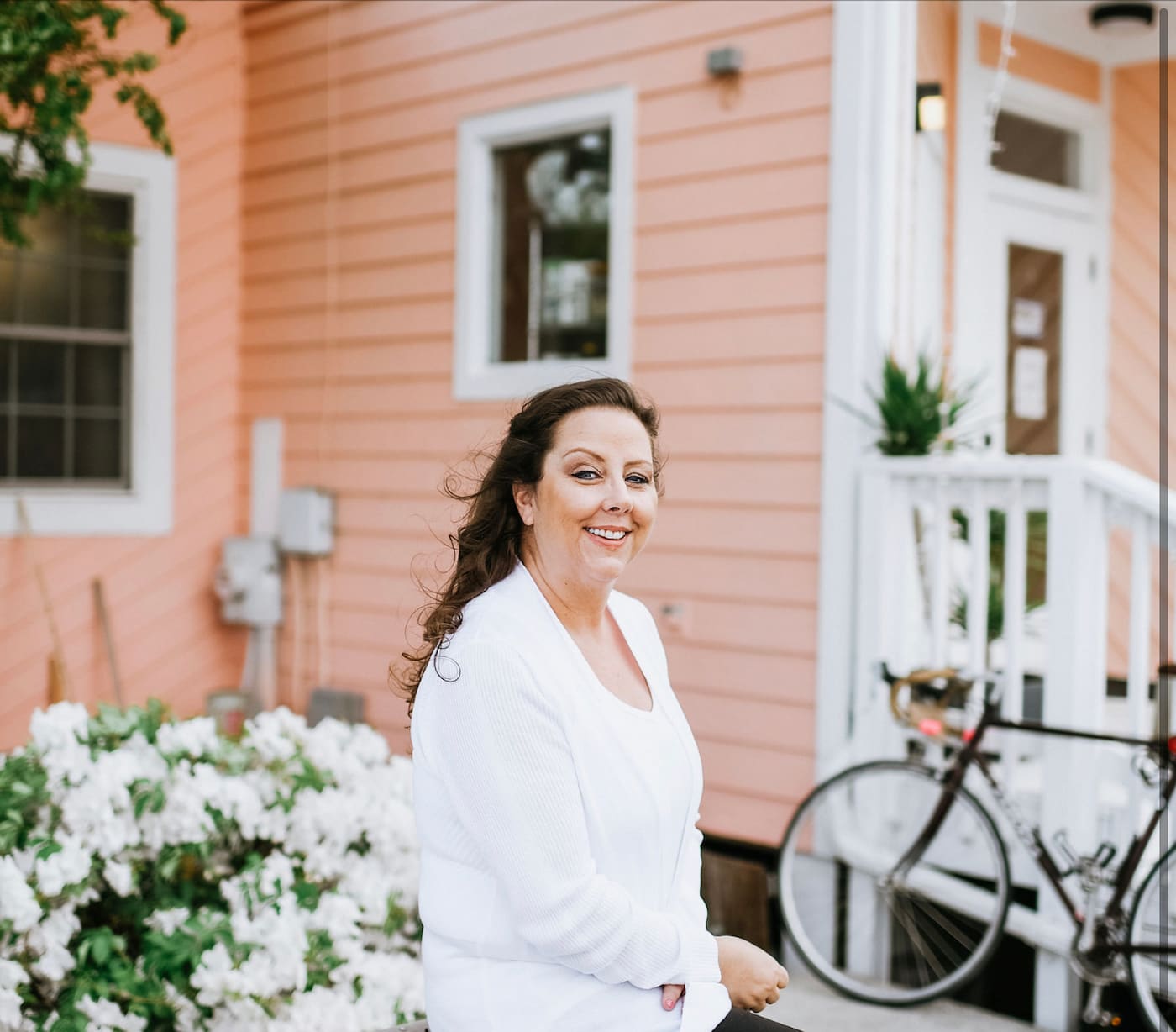 In this installment of  Meet the Merchant, we interviewed Jeanette Lopez Georgiti, the owner of Salty Sista’s in Sneads Ferry, North Carolina. Jeanette talks about the details of growing her business, Salty Sistas’ eclectic menu, and the constant drive to give back to her community.

Clover: How did Salty Sistas begin? What was the inspiration to start a food truck?

Jeanette Lopez Georgiti: For about 10 years, I had a soup kitchen and a food pantry, and I would feed about a thousand people a month. I was constantly trying to raise money to be able to provide for the people in need in our area. I ended up thinking, “I need to start a for-profit so I’ll be able to support the nonprofit stuff that I want to do.” I was actually thinking about finishing my master’s degree in counseling. But I love cooking. Any time I’m upset or stressed out, I just spend so much time in the kitchen. So I got a food truck. I thought it was going to be a great way to get out there and then pick a local charity each month that I could give back to. And it was! Before we even put the food truck on the road, we were booked out for almost a whole year. We were not only able to support ourselves  but I was also able to really give back. And then we did so well that I opened up a little eatery too.

Clover: So how long did you have the food truck before you decided to take the next step and go into the brick and mortar part of business?

Lopez Georgiti: Yeah, it was crazy. We already had a commissary. And my commissary was big enough to have just a little bit of an eatery out front. But one of my passions—and I did this when I had the soup kitchen—was meals-to-go. In order to raise money at the nonprofit, I would do it once a month where people could have a choice of all these different meals. We do all the work and they just pop it in the oven. I wanted to be able to do the same thing here and it quickly turned into people wanting to come in and order food. So I ended up with a little bit of an eatery here.

Clover: So tell us how you learned about Clover.

Lopez Georgiti: I had a young woman come in and ask me a few questions about how everything was going with the POS system that I had. We were just using something on our phone but I wasn’t very happy with it. We had tried going with some other companies, but they couldn’t get our systems to run on the food truck as well as in the kitchen. Clover has been wonderful because it’s given us the capability to do things in a lot of different ways. We were able to get set up on both food trucks, our drive-thru and then the front, they were all different products. I think I have one of every Clover device, which is great.

Clover: Yes, you have the Clover Flex, the Mini, the Go, and the Station! So how has that helped keep things running smoothly?

Lopez Georgiti: Oh my gosh, it’s so helpful because everybody learning the system on one product knows how to do it on all the products. Even though some are smaller and some are larger, it’s all the same, so that makes training easier for my employees. The recordkeeping is phenomenal also. And I’m actually getting ready to talk to Clover because in the new restaurant, we’re going to have a bar. So now I need to work on getting some more equipment for that!

Clover: That’s exciting! Was there any particular inspiration behind your menu? You seem to offer a little bit of everything.

Lopez Georgiti: Yeah! I was always eating at food trucks, and they were always either barbecue or burgers or cheesesteaks. I’m a really picky eater, so my husband would be able to find something to eat, but I couldn’t. I loved the idea of a food truck, but I loved the idea of being able to provide a great menu that appealed to everyone more. Whether it’s for a child or someone who is a vegan, we offer something for everybody. And we live in a shrimp village, so I wanted to make sure I stocked the local shrimp. Now we have the eatery, and I get eggs from a local farm and we get as much produce and stuff as we can from around here.

Clover: What is the food scene like where you are in North Carolina? Are people receptive to non-barbecue foods or non-seafood?

Lopez Georgiti: One hundred percent. It’s actually very eclectic. We get people from all over the place. And so, you know, our Philly cheesesteak is really a Philly cheesesteak for the people from up north. We do a bang-bang shrimp taco which is the second most popular item on our menu. We are the only eatery around here that serves lobster. And then I make a different soup of the week starting in September, and we serve it with grilled cheese. It’s one of the big things we’re known for and that everybody looks forward to.

Clover: Tell us about these lobster rolls because it seems like that’s the thing that people really go crazy for.

Lopez Georgiti: They do! My husband is from Maine, so he wanted to make sure our menu included Maine lobster. Anything my husband wants, he gets. He is just so supportive of my dreams. So that was the very first thing we put on the menu, and it has been a huge success. And it’s been an amazing thing for the menu, although the prices have really gone up. I was talking to some of the fishermen, and they were saying it’s becoming tougher and tougher and people like me but it’s huge for them. I love that even from down here, I can support a company in Maine from my husband’s hometown.

Clover: You’ve already mentioned some of the local products that you’ve been able to incorporate into your menu. Why is it so important to support local farmers or seafood merchants when you’re creating your menu?

Lopez Georgiti: It is so important. For example, the eggs we get aren’t just from a local farm. We have an autistic child who ended up getting his own chicken on his family farm, and he comes in each week to deliver these eggs to us. Seeing the smile on his face when we hand him over the money is just — you know, you’ve made it in life. It’s incredible not only to support local businesses, but then you’re supporting a child who is really trying to just build something of his own. That’s a beautiful thing. We know that for the local farmers, the shrimpers and the local fisherman, this is their livelihood. This is what keeps them and their children alive, so supporting them is absolutely huge for us.

Clover: What are some of the other things the food truck and the restaurant have enabled you to do as far as giving back to the community?

Lopez Georgiti: We give a lot to the local schools. If we do a football game, we give them 10 percent of our profits. We’ve done the Backpack Program, where each Friday, kids go home with food that they normally wouldn’t be able to eat—or eat as much of—on the weekends. We’ve done so many donations to organizations and private families. And then we do our meals to go, giving them to families in need.

Clover: We know the pandemic was tough on everyone, but as a small business owner, what were some of the challenges that you faced over the last year and a half? How were you able to fight through them?

Lopez Georgiti: I don’t think we wouldn’t have survived if we hadn’t had two things: the food truck and the meals-to-go. The meals-to-go were so popular. I ended up making a pay it forward program for people who were out of work—buy a meal for yourself and pay one forward. So we made, I think, almost 400 pay it forward meals. Then we started taking the food truck into neighborhoods, and people were just so excited to get out. We wore masks and everyone kept distanced. We had a beeper system, so they didn’t have to stay right by the truck. We made sure to do it as safely as possible, and it was perfect. We were booked constantly with all these neighborhoods, so that was a huge blessing.

Clover:  We know you’ve got the new restaurant opening soon! What made you decide to expand?

Lopez Georgiti: I want to do more and we’ve outgrown the space we’re in. At our current place we only have space for about five tables, and there’s so much more that we want to do, menu-wise.

Very soon we’re moving into a 7,000 square foot restaurant. We’re going to keep the food trucks going and continue to just give back. I really want to expand the meals-to-go. I want to put a whole shelf in where if you can’t afford a meal, you can just grab one.

Looking back it’s incredible what we’ve been able to accomplish in the last three years. I wanted to find a way to leave a legacy for my kids, but at the same time, still be giving back to our community. You can’t grow or be successful if you’re not giving back. So that’s the big mantra that I try to live by: that I have to be giving back.