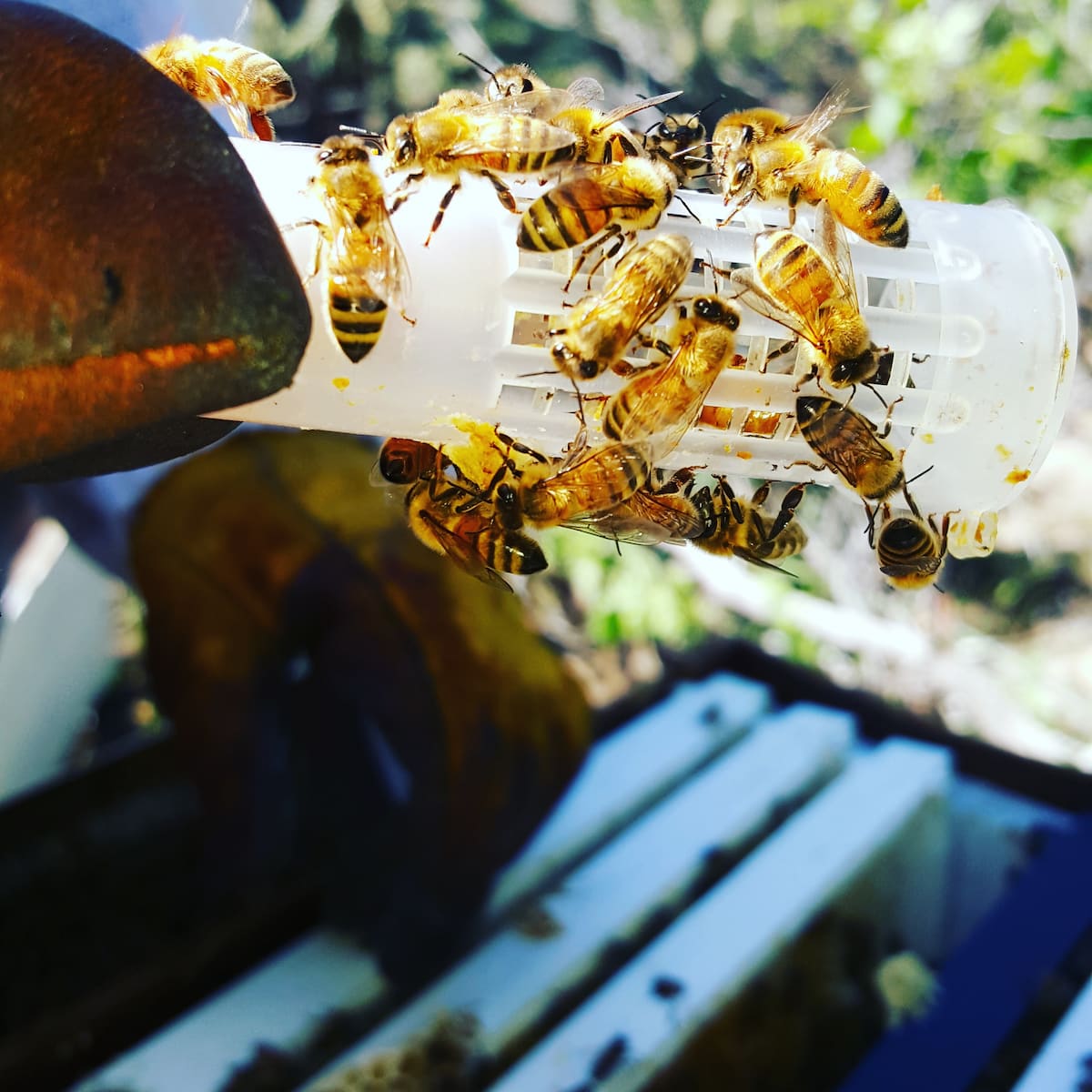 In this installment of Meet the Merchant, we speak to Kemi Pavlocak of O’Shun’s Orchard in Ranchita, California. Pavlocak shares how she and her husband Mike created a community-minded market serving a rural area off the Pacific Crest Trail, and have been working to rebuild since the store sadly burned down earlier this year.

Clover: How did you and your husband Mike first come to the Ranchita area to start your business?

Kemi Pavlocak: I’m originally from Brooklyn, New York. My husband and I met in Greece, when we were both stationed there in the military many years ago. We’re based in San Diego now, and have always found nature to be very peaceful and therapeutic. We came across a plot of land, about 80 acres right next to the Anza Borrego Desert State Park, that had fallen into neglect. We saw an opportunity to clean it up and turn it into a sustainable agritourism area.

A small shop near the land was about to get shut down, which is very commonplace in rural America. But we saw that the town needed a store, so we paused our cleanup project and took over Montezuma Valley Market, as it was called then. We quickly realized that running a store in this kind of remote setting is a challenge, because you have to be a lot of things to very few people. But our location in Ranchita is also vital to the Pacific Crest Trail. We’re the only pit stop around the 100-mile marker for hikers, cyclists, and ultra-marathoners who pass through. So we added an outdoor leisure element to the business as well.

It takes time, and a lot of learning from mistakes, but the store was starting to be successful. We were able to crack the code, and then unfortunately in April [2021] the store burned down.

Clover: We’re so sorry, that must have been very difficult. How have you moved forward?

Pavlocak: It was devastating. We had just figured out a way to make it through COVID the previous year. We used to be very much dependent on the outdoor community, which went away when the PCT and parks closed at the start of the pandemic. But because our location is also considered a food desert, we reached out to small farmers to bring in specialty produce that the community had never seen before. That really helped us through, and we were really excited that we had made it; the first three years are really difficult for any business. Then it burned down. As a small business owner, sometimes you wonder if maybe the world is against you and it’s just not meant to be.

But the community wanted us back, and they really pulled through for us. Chesney, a very kind local and customer from Borrego Springs,  put up a GoFundMe as we work to rebuild. Another small-business mistake is not making sure your insurance increases with your business; ours was not able to cover our losses adequately. The GoFundMe didn’t reach its goal, but it was a lot more than we would have ever expected, and we were really grateful for it. We are in our rebuilding process. We’ve finished the design phase and are in an engineering phase now. We’re hoping to submit our plans to the county soon, and break ground by the end of this year.

I am also a beekeeper, so we still have our honey line. You’re gonna laugh, but it’s called “Savage Bee-ches.” I adore my ladies, because they do what they have to for the betterment of their hives, and you have to respect that.

That’s how we started using Clover, too. Because we can take the Flex to festivals and street fairs and sell honey, which has been helping us with money for our rebuild. We’re also hoping to be able to set up a honey shop in another structure on the property while the main store is being built. We have to see how the county feels about that.

Clover: How did you end up choosing Clover and working with the Clover Flex?

Pavlocak: My husband Mike and I have a separation of duties, where I’m more of the project manager, and he does the sales. (He is awesome at sales, he could sell you anything.) He’s the one who figured out what kind of system would work best for us. Mike found Clover through some research, and wound up having a good discussion with the salesperson. Mike told me that we could take the Clover Flex with us to festivals and wouldn’t have to worry about Wi-Fi. He was also excited that it has a bunch of cool gadgets. It’s been working great; we’re happy with it so far.

Clover: That’s wonderful. What are your plans for the new store?

Pavlocak: It’s going to be very different. The old building dated back to the early 1900s; the new one is going to be steel and painted a terracotta color with a big mural out front. We had an artist recreate the famous “American Gothic” painting for us with a yeti and a bee. We’re going to change the business’ name as well, to Ranchita Bodega.

We’re very active in the community of Ranchita, which is unfortunately a low-income area, and have come to understand what their needs are. We’re adding a shower, as a way to provide a service and access to water, because a lot of people in the community don’t have running water. We’re also adding a commercial kitchen; we’re not seasoned chefs or anything, but it’s warming when you can provide cooked meals.

Back when we took over, our store had been what you would consider just a typical convenience store. But we fought tooth and nail to get the permit changed to a beer garden. There’s a lot of loneliness here, too, so we wanted to provide a seating area for the community to comfortably sit outside and converse. Hikers from across the world also come through on the PCT, so we wanted to create an opportunity for people from different cultures to meet. That’s invaluable, and one thing that really hurt when we lost the store. So we’re going to expand on that, offering people the ability to have a cooked meal and sit around the store.

Clover: You’re currently working with the state and county to get a public water system permit, and help the community’s access to clean water. Is that right?

Pavlocak: We are. There’s definitely a tough push and pull when it comes to infrastructure in rural communities. The state wants to keep certain places untouched, but with the cost of living so high in San Diego and elsewhere, people are still moving out here. And they need certain support systems and amenities to have a decent quality of life. Ranchita has never had a localized water system; everybody has an individual well. But the poverty is so bad that some people just can’t afford to have one.

As part of our construction, we’re trying to partner with the county to say: the community is growing and will need more water. So we’re willing to provide access to the water we bring in, and perhaps it could lead to creating an actual water system in the community. We’re hoping we can build it to a standard that would be usable to the fire station that’s nearby as well.

Through all of our experiences here, we’ve come to learn how important just one business can be to the community. The common sentiment [among business owners] is: if it doesn’t affect your bottom line, then you shouldn’t care about it. But that’s the one thing that makes us really stand out in the community of Ranchita, and our sister town Borrego Springs. We’re very active in the issues that impact the community, and I’m proud of that.

We do certain things because we know it’s good for the community in the long run. I think businesses need to get back to that, and think about the role they play for those around them. Times are changing, and it’s important for us to have an ethical stance and do more for the people who provide us income.