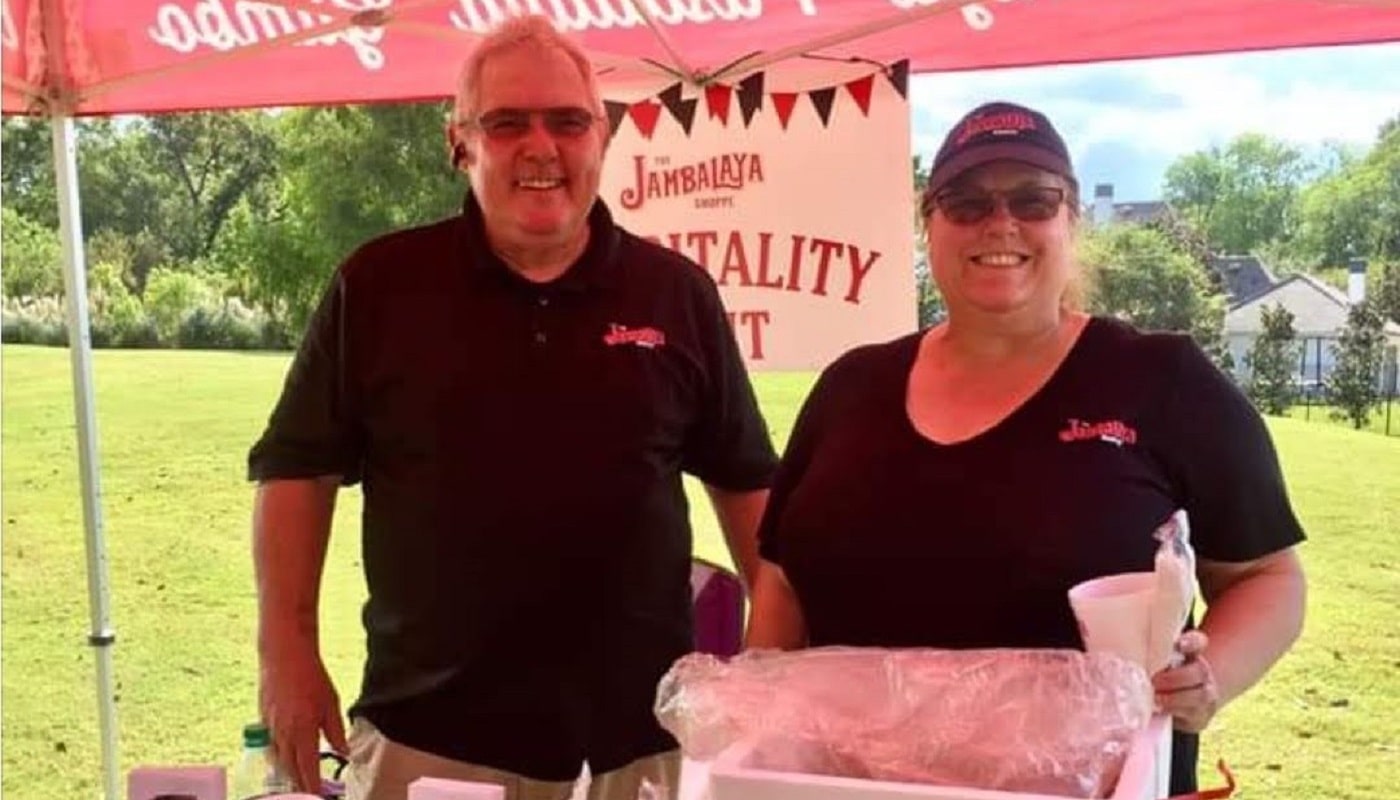 In this installment of Meet the Merchant, we speak to Kathy Fives of The Jambalaya Shoppe Acadian in Baton Rouge, Louisiana. Kathy shares her thoughts on good food, life running a franchise, and how Clover has helped her deal with the pandemic.

Clover: It’s great to speak with you today, Kathy. Can you share your Jambalaya Shoppe story?
Kathy Fives: Over four years ago, the founder of the Jambalaya Shoppe, Cheryl Fontenot, hired me as a consultant to help transform her local restaurant chain, with its six locations, into a franchise. I worked with her as a franchise consultant for several years until she mentioned she was interested in selling one of her locations. I realized that running one of her franchises was exactly what I wanted to do.

So, in 2017 my husband and I bought our first Jambalaya Shoppe. When we bought it, it was a successful downtown Baton Rouge restaurant open Monday through Friday for lunch. About a year or so later, we decided we wanted a full-serve, full-time restaurant. So after finding a great location,  we built the second location. Six months later, in March 2019, we opened our second restaurant at Acadian and Perkins. We’re really enjoying working with the company. It’s been family run for twenty-seven years and they are great people.

Clover: What does a franchise consultant do?
Fives: A franchise consultant helps companies decide on a vision—what they want and don’t want for the future of their brand. When I joined the Jambalaya Shoppe, it was a well-known, successful regional chain owned by family members and friends of the family, but it wasn’t standardized. Cheryl hired me to help her establish a standard. Together, we brought her vision to life.

In a franchise like McDonald’s, for example, restaurants offer a similar look and feel, food, and operational standards. Regional chains are different. They typically start with one restaurant and add-on locations as they go. They’re not usually standardized.

To create The Jambalaya Shoppe franchise, we hired an engineering and design firm to design a prototype build-out for the company, so new franchisees would know what a Jambalaya Shoppe restaurant should look like. Now the build-outs for all the restaurants are similar. We also standardized the menu, recipes, and templates for their operations manual to ensure each restaurant creates the same experience. That makes things easier for everyone, especially franchisees who may not have much experience in owning a restaurant.

Clover: Tell us about the food!
Fives: Honestly, the food is delicious. It’s made from simple, homemade, family recipes with fresh ingredients in our kitchen. Each morning, the chef starts cooking from scratch. Everyone who eats at the restaurant loves the food, and the online reviews reflect that. The gumbo and jambalaya are award-winning. I’m so proud to be a part of a company that can say that.

Clover: What were the biggest surprises for you as you opened up the restaurant?
Fives: Permitting… it sure takes a while to jump through all those hoops! Architectural drawings have to be submitted to the city, and the city has to follow its process. I didn’t know it would take as long as it did for us. And waiting for inspectors was difficult. We’d expect them on Monday, for example, and they’d show up several days later. You can open a new location the minute inspectors approve, so we’d be waiting with a full staff every day for them to come. Of course, once we opened, everything was great.

Clover: How did you find your customers? Is opening a franchise easier than starting a brand from scratch?
Fives: We did a lot of advertising at the beginning—on the radio and in social media. We also ran lots of print advertising, direct mail, and did a blitz advertising campaign. And we hosted a live, day-long radio broadcast at our grand opening with a local radio station and a live DJ. We made it a big deal, and gave away free jambalaya. Of course, even a year and a half later, not everyone knows we’re here. But we’re very involved in the community and make a lot of donations to keep our name out there. It’s an ongoing process, for sure.

Clover: How did you end up using Clover?
Fives: When I started working with the franchise management organization as a consultant, they didn’t have a POS system. They brought Clover into the Jambalaya Shoppe because the restaurants needed a POS to handle inventory, ordering, back office, and everything else we needed to run the restaurant. From a restaurant owner’s standpoint, Clover has a user-friendly interface and the back-office reporting we need to run the franchise. It’s an affordable option for franchisees, and it’s been a good situation since we started using it.

Clover: Do you use any apps from the Clover App Market?
Fives: We use Scan-to-Order, so our customers can order through the app or online. The orders come straight to our register and print out in the kitchen, so we can get them ready to go. My partner’s pretty open when it comes to trying new things, so when the second Scan-to-Order was available, he signed right up. Our customers really like it. It gives them a touchless payment and pickup option they didn’t have before and has been very well received. It was a seamless transition for our staff, too.

The Clover Customer Engagement loyalty program allows us to send our customers coupons. And Clover Feedback is very handy because we get feedback straight from our customers about what they think of our food, service, or any of those things. And it’s in real time, so we can respond very quickly. We can send a thank you or a free dessert to a customer right while they’re standing in our restaurant.

Clover: How has the pandemic changed business for you?
Fives: It changed our business in a very big way. Early on, we had to close our dining room completely. Then, our city government let us open it to 25% capacity. It’s been an ordeal, to say the least. In addition, as we received permission to open again, we put up Plexiglas. We offer hand sanitizers and have a more rigorous cleaning schedule. For example, we sanitize the door every time anybody touches it.

Our operations have changed, but the way we cook hasn’t. We had to do takeout for so long that we kind of assimilated it as a primary service. As we’ve opened our dining room again, we’ve placed tables to socially distance our customers and we wear masks. Clover helped us during the pandemic to manage a third-party delivery service, which is now a big part of our revenue stream.

Clover: I know that giving back to your community is important to you. Can you share more about that?
Fives: At the beginning of the Covid crisis, one of the commanders of the Louisiana National Guard came into the restaurant on his first day in Baton Rouge. I immediately offered to serve his entire group lunch whenever he wanted. We keep a picture of the commander and his superior in the restaurant, and they sent us a lovely card.

Because we don’t save jambalaya and serve it the next day, we got involved with Baton Rouge hospitals and brought leftover jambalaya to the ICU staff and emergency room staff. It became a habit. We’d take coolers of food with us when we leave work and bring it straight to the emergency room door. They’d have their cart ready to pick it up like clockwork every night. Other Jambalaya Shoppe locations got involved, too.

We also give discounts to first responders and uniformed officers of any kind: police, firemen, and anybody else with uniform or ID. Just last night, we donated jambalaya to the local fire department. We want to stay heavily involved in the community and support the people who support us.

Clover: What advice can you offer other small business owners?
Fives: Anybody considering becoming a small business owner, particularly in the restaurant or hospitality industries, has to really love what they do because they’ll be dealing with operations everyday. Things don’t fix themselves, so you have to understand that you’ll need to be in the thick of things regularly. An absentee restaurant owner just isn’t as productive as someone who’s involved in the business. And, I tell everybody you need a business plan going in and you need to know your profit and loss statement. If you make a business plan and follow it, I think you’ll succeed 9 times out of 10.