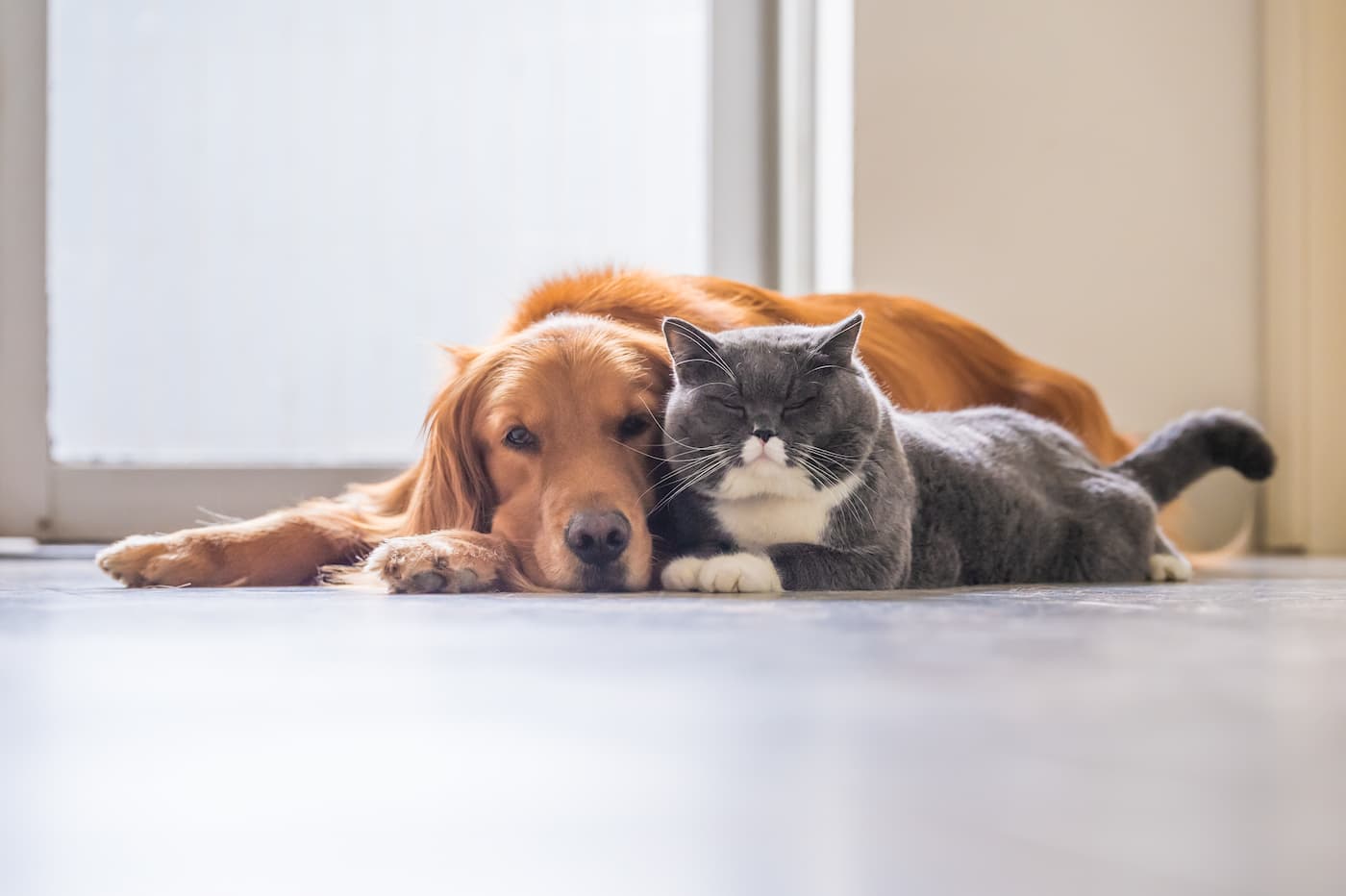 We all know the joy and love our pets bring to our personal lives, and businesses increasingly have begun to appreciate the “pawsitive” effect they can have on employee morale and productivity.

From pandemic pet adoptions to remote work and fur-baby cameos on Zoom calls, trends of the past two years have further enhanced the power of the dog—and cat. In fact, some businesses have even begun offering “Paw-ternity Leave” so employees have paid time off to bond with (and house-train) their adorable new family member.

Around 70% of U.S. households have at least one pet, and last year, Americans spent over $123 billion on their pets. During the pandemic, when millions of people were isolating in their homes, an estimated 23 million households added a new pet. That’s roughly (or should we say, ruff-ly?) 23 million new reasons for businesses to become more pet-friendly. According to a survey, 79% of customers said they value pets being welcomed into a business, and 49% said they’re more likely to visit a business that’s pet friendly.

Taylor Wallace is no stranger to the entrepreneurial lifestyle. “I don’t think entrepreneurs are born,” he told the St. Pete Catalyst. “I think they’re made. I was blessed to grow up in an entrepreneurial family.”

Wallace spent years in the technology startup space, running a mobile app for photo and video editing until 2017. After that, he spent a few years as a digital nomad, bouncing around the globe to cities like Berlin, Tel Aviv, Jackson Hole, and Los Angeles working in technology, marketing, and PR. He finally ended up in Tampa Bay, Florida, shortly before the pandemic’s first wave hit — forcing him to finally stay in one city for a while.

It was there that he reconnected with an old roommate who was, at the time, running several doggie daycare centers. After some illuminating conversations about the pet care business, Wallace spotted an opportunity to apply his expertise in tech and software. So, the two of them partnered up. “I wanted to do something that I could touch … that has some tactility to it,” he explained.

Wallace’s company “Paws ‘N’ Rec” is a modern, user-friendly pet care service. Paws ‘N’ Rec offers daycare, hoteling, and grooming for pets all based around a membership model with monthly fees. “If you can find a passionate person like my partner that really knows the industry well,” Wallace explains,“ and then you combine them with the systems thinking that tech people bring … you can build something really profitable.”

Find a niche within a niche

Tim Vogel, CEO and founder of Scenthound, ran a mobile pet grooming business for years, which is when he first took note of an overlooked but real need. “I discovered that there was a problem with the grooming industry because it failed to reach dog breeds that do not require haircuts,” he told Small Business Trends; these low hair-maintenance pets include Beagles, Boxers, and Great Danes.

So, Vogel took some time to refocus his dog grooming enterprise in an effort to reach the uncoiffed. His brand now emphasizes dog health and wellness over primping and preening. “While most groomers focus on hair styles and aesthetics, we groom from a wellness perspective,” he says. “We provide a simple, one-length haircut for dog breeds that need it, and the rest of our grooming services are centered around keeping your pup healthy and avoiding health concerns later down the line.” Scenthound’s preventative care covers skin, coat, ears, nails, and teeth — which can help pups avoid everything from gingivitis to more serious infections.

The company has been so successful that Vogel was able to franchise Scenthound out to over a dozen additional locations. Scenthound has plans to open several more locations around the country, offering full-service care to all breeds. Vogel credits his success to his inclusive, “all-dogs” model. Still, he is partial to one: Lucy, his Goldendoodle, “is the company muse,” he says.

For the love of dogs

Combining your business acumen with your personal passions is the dream for any entrepreneur. Brian Taylor, owner of Harlem Doggie Day Spa in New York City always loved animals, but his journey to owning a doggie daycare center was far from obvious. “I’ve always been a person that loves animals,” Taylor explained to Clover. “But I’m from Sierra Leone on the west coast of Africa, and it’s highly unusual in my culture to have dogs at home.”

After moving to the United States, where dog ownership is commonplace, Taylor went so far as to secretly adopt a puppy and hide it from his parents. “When I was 15, my brother and I rescued a dog and kept it in our basement until my mom found out,” he said. “We found a home for that dog with one of our neighbors, and that feeling of joy inspired me that at some point in my life, I’d be able to have my own dog; I couldn’t wait.”

In 2008, Taylor was working as a banker when a woman walked in with five dogs, and explained that she was a professional dog walker. “I was fascinated!” Taylor told Clover. “I had been looking into the dog industry, and was well aware that there were not a lot of services for dog owners in Harlem. I had a plan to open a pet retail store. She pointed out that if you focus on service, customers will always come back.” Eventually, the two of them opened Harlem Doggie Day Spa, and in 2013, Taylor became the sole owner. “I focused on excellent grooming skills and building relationships with my clients,” he said. “I started to build a following on social media. Everything I did for the business I made into a big deal. I made it a celebration.”

For 12 years, Giulio and Carolina Ferrari ran “The Paw Depot,” a natural pet market in Dallas-Fort Worth, Texas. After running their business successfully for over a decade, the Ferrari’s started eyeing a new venture. Ideally, the couple wanted to dive into something that would speak to their love of music, art, food, and of course… pets. So, they dreamed up something that combined all.

The Pawtio is a restaurant and bar for cats, dogs—and humans are welcome to come along—with an event space featuring live music, DJ’s, and an art gallery. “You won’t find another place in D-FW where you can see amazing art, listen to great music, talk to friends, sit, stay, sip, and give your dog a bone… or a full-course meal if you choose,” Giulio told The Dallas Morning News.

So what’s on the menu? Well, enough high-quality, locally-sourced pet-friendly entrees to make any mere human jealous. “The food is human grade, but it’s balanced for dogs or cats and will have a mix of amino acids and meats,” says Giulio. “The pets absolutely love it.”

The Pawtio offers raw options like beef, duck, and rabbit tartare, along with fully cooked pet-friendly meatloaf, beef stew, and chicken masala. “We really went out to source from some of the best producers in the U.S. so that we could offer nutritious, balanced meals on the menu,” Carolina says. There’s also pet-friendly cocktails called “Lickers” available when your pet gets thirsty — all of which they can consume on custom-made pet-sized furniture.

For the Ferraris, The Pawtio is more than just a novel business idea for pets. They want it to be a space that can foster genuine connection between humans, too. A place that offers animals and people alike a chance to come together and bond, or at the very least relax. “As a community, we have been through a lot the last couple of years, and we all need to heal. We lack places to do that healing,” Carolina says. “Pets and food help people drop their shields, while art and music help people to connect and heal.”

To learn how our POS systems can help you manage your pet-friendly business, contact a Clover Business Consultant today.