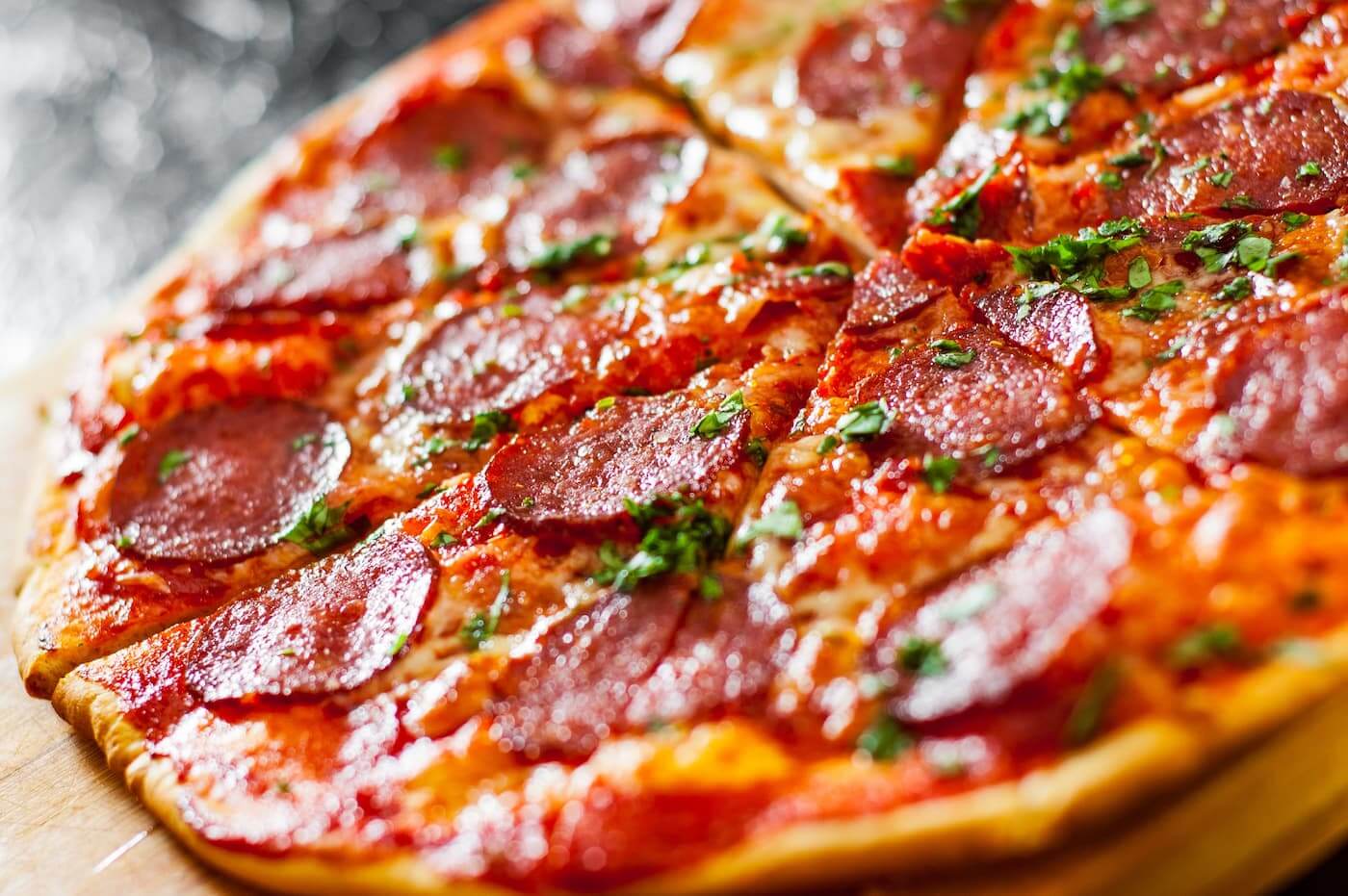 Americans love pizza—and they love bragging about their home city’s pizza even more.

Pizza is a whopping $50 billion industry in the U.S. Americans order 350 slices of pizza every second, and the average American eats 23 pounds of pizza on average per year, according to the USDA. For residents of a dozen or so U.S. cities, there is a self-evident truth—their town is the world’s pizza capital.

There’s New York City, of course, with its iconic thin crust slices that attract visitors from all over the world. Then there’s Chicago with its buttery deep-dish pies that can keep you warm through even the coldest nights in the Windy City. Other pizza towns like Detroit and New Haven have long put their own spin on the Italian classic. All of which is to say, if you make it as a pizza shop in one of these cities, you can make it anywhere. In honor of National Pizza Party Day May 20, five pizza shop owners from iconic pizza towns share their insights on how to stand out and make it in a brutally competitive business.

New York City is a pizza mecca. Home to one of the first pizza restaurants in the United States, New York is to pizza what Philly is to the cheesesteak, or Paris to the baguette. Some of the best pizza on planet Earth is in New York; to run a thriving pizza place in the Big Apple takes courage.

That’s why Marina Charny of Wild Park Slope knew she had to do something different. “I had this sort of entrepreneurial bug, and really wanted to go out and do something on my own,” she told Clover. “I grew up in New York City, so I know it really well, and I love food. I love the food industry. I always sort of considered myself a foodie.”

Charny decided to place her bets on what is now a hugely popular dietary food trend. Wild is a 100% gluten-free Italian restaurant with gluten-free pizza. “I mean it sounds, you know, basically like it’s not even possible,” Charny admits thinking when she first came up with the idea.

Importantly, she paid careful attention to the changing demographics of her neighborhood in Park Slope, Brooklyn, and felt confident the concept could eventually take off. “I just thought that was like the perfect neighborhood because there’s a lot of young families there,” she says.

Park Slope was quickly filling up with health-conscious millennials, and when Manry opened the doors to Wild, it became a go-to spot for Park Slope’s gluten-free pizza connoisseurs, including actor Chris O’Dowd who became a loyal fan.

Chicago’s storied deep-dish pizzas are so delicious and comforting they can warm the heart of even the most hardcore New Yorker. Chicago has perfected their deep-dish pies to such a degree that “Chicago vs. New York” is an age-old, and, unwinnable debate.

Similar to New York City, if you open up a pizza shop in Chicago, you’d best not come to play. Robert Maleski, owner of Milly’s Pizza in the Pan, was well aware of the stakes before he opened his doors in 2020. He spent an entire year at home practicing and perfecting the deep-dish fundamentals, with a particular focus on the burnt-cheese crust. “To me, that’s the best part of the pizza,” he told the Chicago Tribune. “And it’s really the dough that creates that crust. If it hasn’t risen up to a certain height, then you’re not going to get that beautiful ring of cheese in there.”

Once Maleski was on top of the fundamentals of Chicago-style pizza, he put his personal stamp on his pies in the form of toppings. The “Untitled #1” pie, topped with jalapeno and pepperoni, is Maleski’s personal favorite. Then there’s the “Updog” topped with pepperoni, spicy sausage, spinach, and peppers. The “Que Suerte” features bacon, jalapeno, and perhaps the most divisive pizza topping of all time: pineapple. The delicious result: Maleski’s pies manage to be both classic and unique at the same time.

Like many of us at the start of the pandemic in 2020, chef Dennis Lee began experimenting with sourdough starter. Locked indoors, with little else to do, the prolific San Francisco restaurateur, who launched multiple successful Korean restaurants in the Bay Area, spent his time experimenting and perfecting sourdough with his kids. “Then we started messing around with pizza,” Lee told Eater.

That was the beginning of Sunset Squares which, for months, was an underground pizza shop operated entirely via Instagram. After perfecting a long-fermented pizza dough, Lee began making pan pizzas and selling them to friends — taking orders through his Instagram DMs, and processing payments through Venmo. After a while, he opened up orders to the general San Francisco public, and it took off.

Now Sunset Squares has stepped off the internet and is set to open a physical slice shop in San Francisco. Lee also has plans to offer his fermented sourdough pizza in bars and corner stores.

Although, one lesson he’s learned from those early pandemic days is not to rush. “I’m just trying to appreciate life day by day,” Lee says. “If people want the pizza they’re going to continue to want the pizza.”

Detroit-style pizza has been called the fastest-growing trend in pizza, and if you’ve ever sampled the offerings, it’s easy to see why. Detroit pizza is a square pan pizza with a crispy burnt-cheese edge that’s so satisfying and cravable that even national delivery giants like Pizza Hut have added it to their menu.

When Shawn Randazzom opened up Detroit Style Pizza Co, embracing the regional style was a no-brainer. “For me it was always gonna be Detroit,” he told PMQ. “To me it’s not a style. It’s just pizza.”

The real secret to Randazzom’s success, and perhaps the secret behind Detroit pizza’s massive rise in popularity, grew out of pizza-making competitions. “In 2009, when I went to Columbus and brought my Detroit-style pizza and won first place, I was the only one there out of 60 or 70 competitors, 3 and a half hours outside of Detroit, that had a square pizza with caramelized cheese and sauce on top,” Randazzom told PMQ. “It fueled the passion in me to really put this style of pizza on the map.”

In 2012, Randazzom was named World Champion Pizza Maker of the Year — a huge achievement that also helped further raise Detroit’s pizza profile. “I think that really opened up the gate for a lot of people to be exposed to it.”

In New Haven, pizzas have thin charred crusts and are frequently topped with littleneck clams. Since 1934, some of the best New Haven pies have been coming out of the brick oven of Modern Apizza on State Street. “We are the local place, we’re where the locals go,” owner Bill Pustari told Eater. “We’re not located on Wooster Street, which is kind of considered Little Italy… Wooster Street gets a lot of tourists.”

Modern Apizza’s location outside of the main hustle and bustle has allowed it to grow into a legendary hometown favorite. It’s the spot you go to when you’ve grown up in the area. But its legendary status means that pizza lovers all over the country know about it, and seek it out. Among them, Hollywood director Steven Spielberg. “He stood there, he waited for his table like a normal human being,” Pustari recalls of Spielberg. “No bodyguards, talked to people, and came in and ate. He’s one of my favorites, now.”

By pleasing the locals for decades, Modern Apizza has grown into a pizza empire. Pustari even signs autographs these days, and receives love from world-renowned chefs. “I’ve signed hats, shirts, box tops for people to hang up in their house, all kinds of things,” he says. “I never really thought it would be this crazy.”

Looking for more FSR and QSR content? Check out our collection of industry articles.