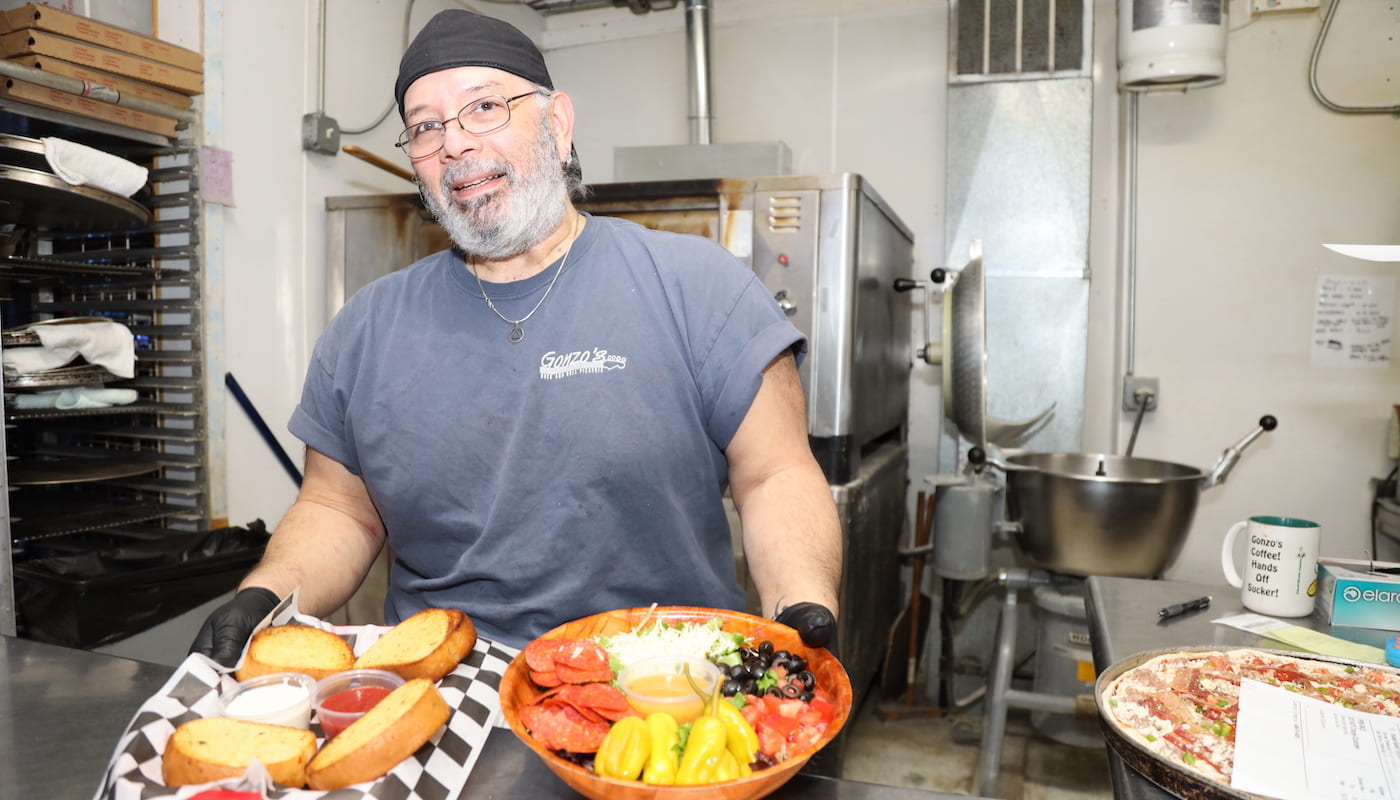 In this installment of Meet the Merchant, we speak to Arturo Garza of Gonzo’s Rock And Roll Pizzeria in Sandwich, Illinois. Garza shares his background in music and pizza making, how his team has maneuvered through the pandemic year, and his preservation of a beloved local recipe.

Clover: Hello, Arturo (AKA Gonzo). Why don’t we start by having you tell us how you first got into pizza.
Arturo Garza: I’ve always felt drawn to the food industry. I love the energy inside a commercial kitchen and the restaurant atmosphere in general. My first job as a teenager was as a dishwasher in a pizzeria.

From there, I moved up to food preparation and cycled through a few pizzerias. Then, in the mid-80’s, I had the pleasure of working under who would ultimately become my lifelong mentor, Gary Schaefer, AKA “Gario.” Gario, who is 87 now, is a local pizza legend. I credit him with so much. He taught me a lot about the business during those early days in my career and gave me endless inspiration.

Eventually, with his blessing and namesake recipe, I opened Gonzo’s Pizzeria in 2007 and renamed it Gonzo’s Rock and Roll Pizzeria in 2011. His name is very well known within this community, so it really boosted my reach when I first opened to let people know I was using his recipe. Some customers travel 40–45 minutes west from the Aurora, Montgomery, and Oswego area to come eat our pizza because of the Gario brand. He has always told me, “Just capitalize on my name. You have my permission and I want you to.” I did, and it worked. I take a lot of pride in his recipe, and I take very good care of it.

Clover: And how did the name of your pizzeria come about? Does your place have a rock and roll influence?
Garza: Gonzo was actually a nickname that I got back in high school. A couple of my then bandmates took my last name, Garza, and one thing led to another—Garza, garbanzo bean, and the next thing you know, they were calling me Gonzo. That’s pretty much it.

At heart, I am first and foremost a musician. I’ve played bass for approximately  45 years now, though never professionally, so I make pizzas which is the next best thing since my dream of playing music full time couldn’t be fulfilled. I seized the opportunity to combine the best of both worlds to create a space where my passion for live music and making pizzas could come together. Hence, Gonzo’s Rock and Roll Pizzeria. And I’m enjoying every bit of it!

Clover: Very cool! Tell us more about the live performances. How do you book your artists?
Garza: I volunteered for several years working as part of the stage crew at downtown Aurora’s internationally renown blues festival, being part of the stage crew and often obtaining stage plots for the sound engineer taught me a lot of the ins and out of the local music scene which, in turn, has helped me along the way in bringing in local talent. I think it is very important to feature local artists as a way to highlight the talent in our community.

The musicians that play here really enjoy the intimacy of our space. It’s a relatively small dining room—we only seat about 35 to 40 people during normal operations—but we’ve got high ceilings and wood floors, so the sound is rich and vibrant. It feels like a tight-knit community where everyone knows and supports each other.

Of course, we haven’t had any live performances this year, but I look forward to bringing that back as soon as we can.

Clover: Okay, back to pizza. We have to know—thin crust or deep dish?
Garza: Ha! Those not from this area might assume all Chicago pizza is deep dish, but I don’t see pizza crust as needing to be only one or the other. Another inspiration I’ve borrowed from Gario is what he called his “original crust,” which is pre-baked, and I believe it’s pretty unique in this area. I’ve heard of others trying to come up with their own version of a pre-baked crust and they say, “oh, it’s like Gario’s.” So I feel that the Gario’s original crust has become a point of comparison.

Gario himself never offered a deep dish or a stuffed or an ultrathin. It was always just a pizza, small or a large, a 12 or 14 inch, that’s it. No ifs, ands, or buts about it. I feel very fortunate to have this recipe because it has a really cool history behind it. People still come in to this day saying they grew up eating it and they are happy that we still make it the way he did.

Clover: Talk to us about when you chose Clover. Clover wasn’t available back in 2007 when you started, so you must have made the switch at some point. What compelled you to do so?
Garza: I first saw this really cool system on display in the waiting area in the local bank, where I have my business accounts. When I asked about it, an employee said, “do you want me to send a Clover rep your way?” I was like, “sure, why not?” I was with First Data before, but it was just a standard terminal and that’s it. So when the Clover rep stopped by the restaurant, it didn’t take much explanation before I was sold. I’d never had a POS system until then. And I have no regrets. Clover is one of the coolest systems ever. It really is.

Even though I was first drawn to Clover by its cool design, I soon realized how many other things it can do, too. It can do inventory, it can do payroll, it can do scheduling. It’s amazing. It’s streamlined my operations so I can give more attention to pizza and music.

Clover: How has the COVID-19 pandemic has affected your operations over the past year?
Garza: At the beginning of everything a year ago, we were actually busier than ever! For the first two or three weeks especially, we were so overwhelmed with a big wave of orders, I wasn’t sure how I was going to be able to manage. The line of cars in our parking lot was overflowing into neighboring businesses. It definitely took a toll on our mental states as we were all trying to process the newness of what was going on. Eventually though, things calmed down and we adjusted.

Honestly, aside from the initial rush, not a whole lot has changed for us in the past year. I still get up and come to work every day. We have always thrived on carry-out and deliveries anyway, so we were set up well to continue offering those services.

The biggest change is that now we do contactless, curbside pickup. We used to accept cash for take-out orders, but now everything is digital. One positive thing to come out of that change is that now all orders are prepaid, which simplifies our bookkeeping.

Clover: I’m glad to hear you’re managing well! What are some other lessons you and your team have learned from this experience?
Garza: I think in many ways, this pandemic has brought us here in the restaurant closer together in terms of communicating and developing better work routine procedures. We’ve had to redesign our method of getting orders out and we organize our tickets a little differently, but we’re still chugging along.

Overall, we’re grateful for how consistent things have been at the restaurant during a very unpredictable year. We’ve watched as several small businesses around us have been forced to close. Believe me, I’m very grateful to be in the position we’re in. And I don’t take one bit of it for granted.