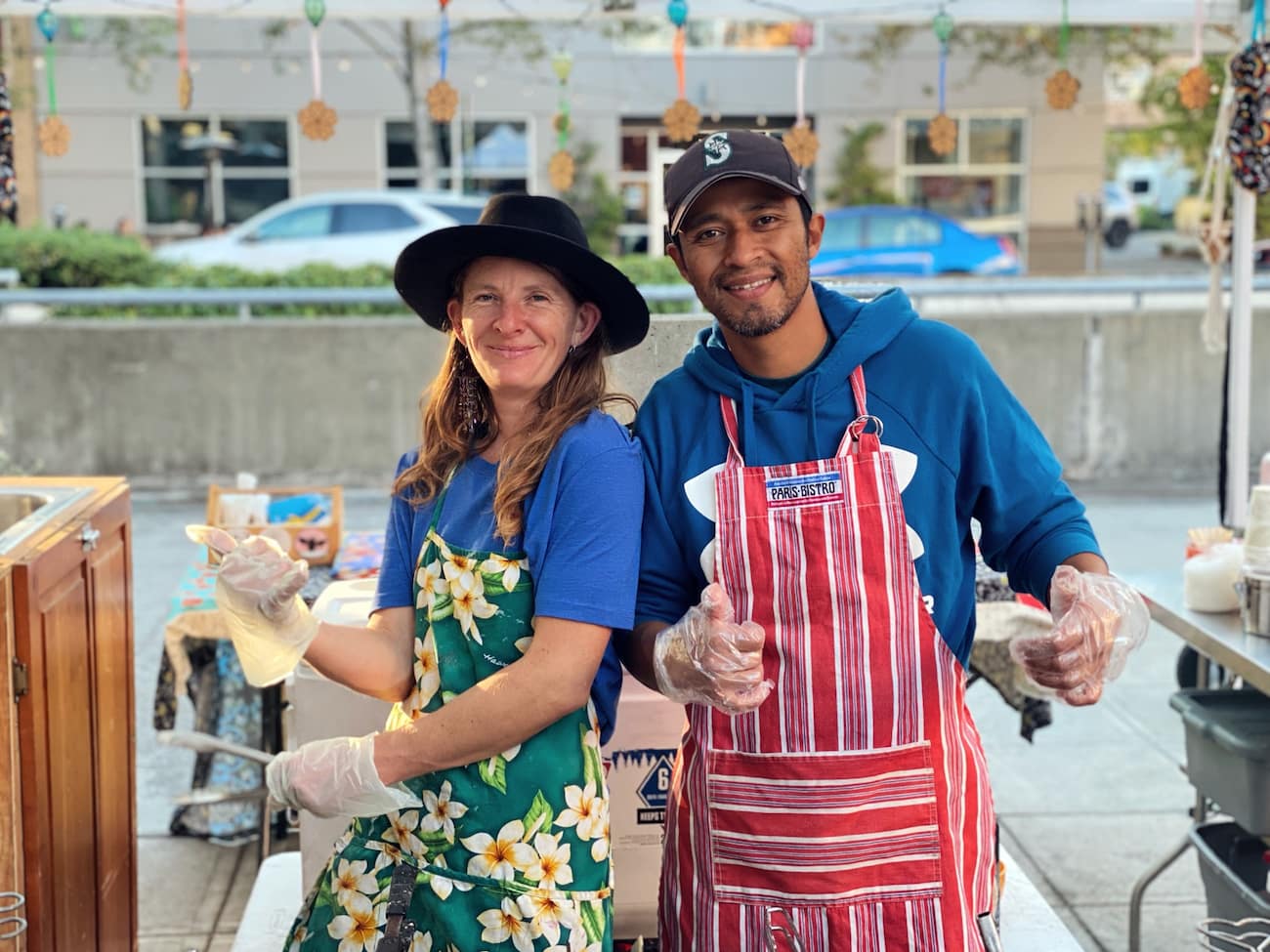 In this installment of Meet the Merchant, we speak to Inga Elvrom, owner of Waffles in Paradise in Bellingham, Washington. Inga shares how her foray in waffle making began with her family’s Norwegian waffle recipe, and how she’s planning on taking her mobile waffle business to the next level.

Clover: Tell us about your culinary background and your introduction to waffle making.

Inga Elvrom: I have 14 years of culinary arts experience, including formal training in the hospitality industry. While studying Hospitality Management at Lane Community College, our final project was a research project “building” a restaurant from start to finish. At the time, my restaurant was called Cafe Paraiso. This assignment sparked a fire in me, and ever since, I knew I would own a food business. The journey took time–it certainly has been an adventure! I lived in Maui for a few years and worked at Pineapple Grill, where they served delicious waffles topped with macadamia nuts and caramelized pineapple.

I moved back to the Pacific Northwest in 2015 and went back to school at Western Washington University from 2016-2018. After I graduated, I entered the workforce as an administrative assistant–a job I liked. It made me realize, though, just how much I actually missed cooking!

Fast forward to 2020, our world gripped in the throes of a pandemic, I found myself out of work with my daughter homeschooling–a common situation for people around the globe! With all this new-found time on my hands, I decided to begin planning my business! The inspiration hit me after a nature walk around Lake Padden here in beautiful Bellingham, WA, which is truly a Pacific Northwest paradise! The family recipe that started it all was our Norwegian heart-shaped waffles made with cardamom and vanilla sugar. Our family ancestry hails from Elverum, Norway, where my great-grandmother Inga (my namesake) migrated from to settle in North Dakota in the late 1800s.

We opened on March 27, 2021–International Waffle Day–at the Rebel Artists of Whatcom Market, which is an Artist and Crafter Night Market. We have been going strong since then at various farmer’s markets here in Skagit and Whatcom County. We vend at the Lynden Farmers Market on Saturdays and the Skagit Valley Farmers Market on Sundays. In this next market season, starting in April 2022, we’ll be at the Bellingham Farmers Market.

Clover: Do you have a commercial kitchen somewhere where you make all the waffles?

Elvrom: We’re at the Goat Rodeo Kitchen, here in Bellingham. We’re working toward opening our own food truck. We bought a 14’x7′ boat trailer, so it’s just a blank canvas. My business partner has a lot of experience in carpentry, so we’re going to build it from the ground up.

Clover: Excellent! Tell us some more about the waffles. What kind of waffles do you serve?

Elvrom: On our menu we have The Queen Bee, a Liège-style waffle made with yeasted dough and Belgian pearl sugar, which caramelizes on the waffle iron when you bake it. It’s very rich and sweet with cinnamon in it–reminiscent of a cinnamon roll.

We have a Brussels-style waffle, which is made with dough as well. That one is primarily savory. The ingredients are rosemary and garlic mixed into the dough. We put kimchi on top of the waffle, which we source from Pangea Ferments, a local producer of kimchi and other delicious fermented goodies! We offer a version of this waffle with smoked salmon sourced from Lummi, topped with pickled red onion and goat cheese, called The Dirty Harry.

Our La Mochi waffle is made with gluten-free mochiko rice flour and coconut milk, served with ube jam, made by a local businesswoman who hails from Oahu. Ube is a purple yam originating from the Philippines and has a delicious nutty flavour.

We source local ingredients, including eggs from East of Eden Farm, milk from Twin Brook Creamery, flour from Cairnspring Mills and Fairhaven Mills, jam from 3 Generations, and berries from Viva Farms. We really love how it’s such a bounty here. We’re so lucky here in Whatcom and Skagit counties to have so many amazing farmers, crafters, and food artisans.

Clover: Is there much preparation that you have to do during the week?

Elvrom: We prepare the day before. We typically prep on Fridays to set up for the weekends. The waffles that take the longest are the Lièges. That one takes about three hours to prep from start to finish because it has to rise twice.

Clover: How did you settle on Clover when you were deciding what you needed for a P.O.S. system?

Elvrom: I decided to use Clover because I bank with the Whatcom Educational Credit Union. Clover is the app that they offer, and we love it! It works very well. It’s very straightforward, which is nice.

Clover: How did you decide on the Clover Go vs. Clover Flex, which is also very popular with food trucks and more mobile vendors?

Elvrom: Because we go to a lot of different farmer’s markets, we figured the Clover Go would be the easiest, most simple device to transport that we keep it locked up in our cash box.

Clover: Are there any other things on the horizon that you see for Waffles in Paradise?

Elvrom: We’re expanding into catering. Since we’re just starting out, we were very honored to be asked to make wedding waffles this past summer! We also made waffles for an employee retreat for Sustainable Connections, a local organization focused on providing resources for local business owners and farms. I would love to have a storefront someday, but we’re taking things step by step.