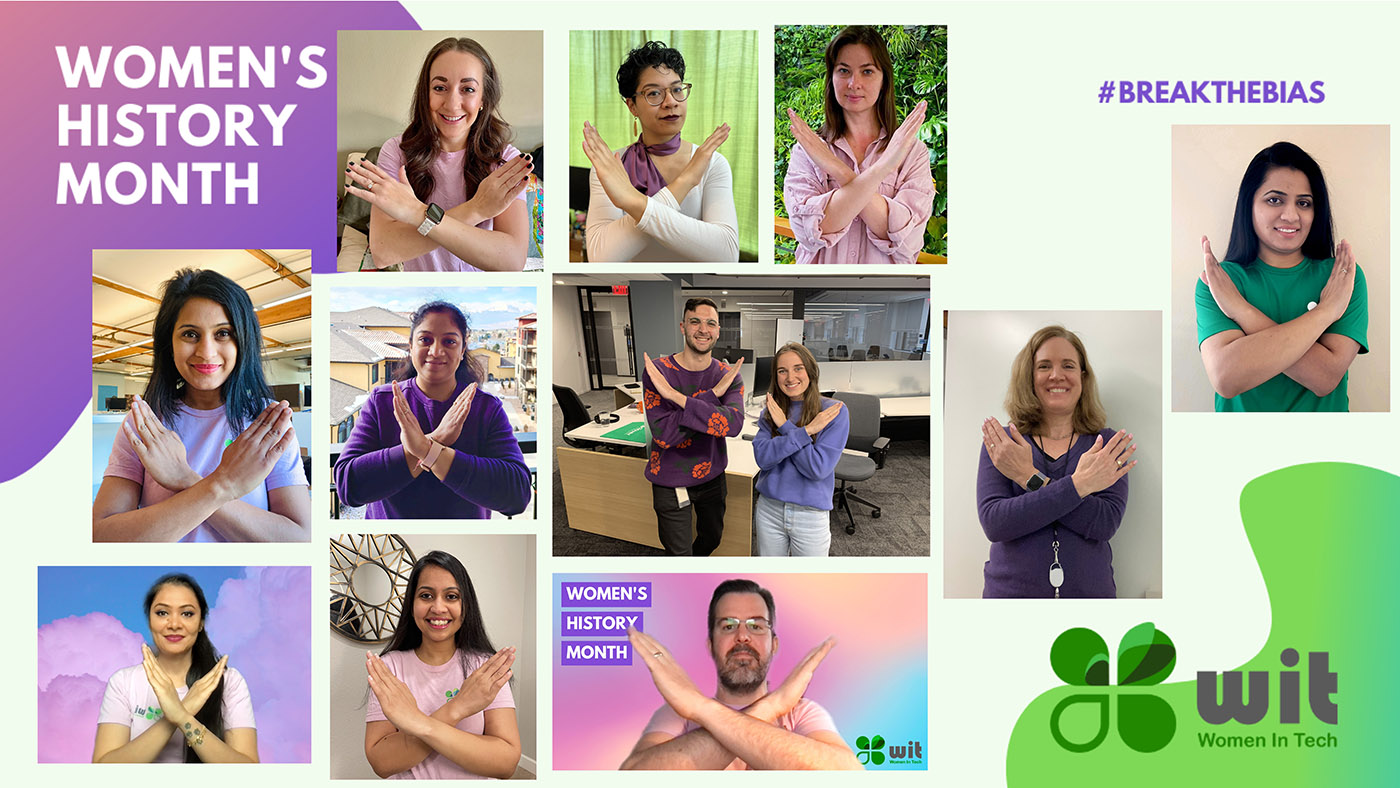 In honor of International Women’s Day on March 8, Clover’s internal group Clover Women in Tech (WIT) hosted a week-long celebration focused on the theme of #BreakTheBias. “The idea for this year’s theme is that there are many biases, both deliberate and unconscious, that get in the way of letting women advance,” says Kristelle Lucero, a Clover web engineer who helped plan the events. “The goal is to break some of those biases, whether it’s through open discussion or taking action.”

The purpose of the IWD events were threefold, according to Meghana Randad, a staff software engineer on Clover’s payment team and chair of Clover WIT: to celebrate International Women’s Day and the progress women have made; to foster a sense of community, especially among new hires; and to introduce people to Clover WIT. “A lot of people did not know that this little grassroots organization exists within Clover and there are all these programs that run around professional growth,” Randad explains.

Started in late 2018, Clover WIT is open to all genders and hosts recurring events including a quarterly book club, a monthly coaching on public speaking and other topics, and leadership workshops with outside coaches. The group’s goal is to help women in tech build connections and advance their careers.

Virtual festivities for IWD included a Fireside Chat with Ellen Linardi, Clover’s head of product, a yoga and meditation session, a lightning talk about women’s history, and a Women’s Appreciation Day featuring a jam board where employees could show appreciation for women they work with.

The week concluded with a paint party led by San Jose-based engineer turned self-taught artist Ketaki Adi. She created an art concept inspired by the theme of #BreakTheBias and made several different variations on her design to demonstrate different ways the theme could be interpreted. Participants created their own acrylic paintings at home using supplies shipped to them in advance or their own paints. “It was easy for everyone to put their own spin on it,” Lucero says. “Everybody’s different pieces are all interesting.”

Clover India is also focused on gender inclusion. They’ve increased the percentage of female employees from 12% to 24% in just six months. They also held their own IWD celebration including an art competition and a live session with Gunjan Saxena, an Indian Air Force (IAF) officer and former helicopter pilot who became the first female pilot in India to fly in a combat zone. Saxena answered questions and shared her own experiences about breaking biases in a conversation shared across genders.

Following Saxena’s session, Abhishek Sinha, site lead for Clover India, shared his views on working together to create inclusion teams. Then employees let loose with a tongue-twister session and a musical jam session by a trio of Clover team members. Clover India’s IWD celebration culminated in a video where employees shared what #BreakTheBias means for them.

Isha Maurya, product manager for data engineering & reporting, co-leads Clover India’s WIT group. Among the takeaways from Clover India’s celebration, she shares, was that “Women are capable, have the strength and power to accomplish whatever task they put their mind to.” She adds that “we should aim for a world where there is no need for a Women’s Day.”

Although IWD 2022 is over, Clover WIT continues its mission. In addition to U.S. offices in Sunnyvale, California; New York City, New York; Atlanta, Georgia; Colorado Springs, Colorado; and (soon to be) Austin, Texas, Clover has offices in Ireland and India. Clover WIT is launching sister chapters in India and Ireland so that those employees can enjoy programming centered on elevating women in tech.