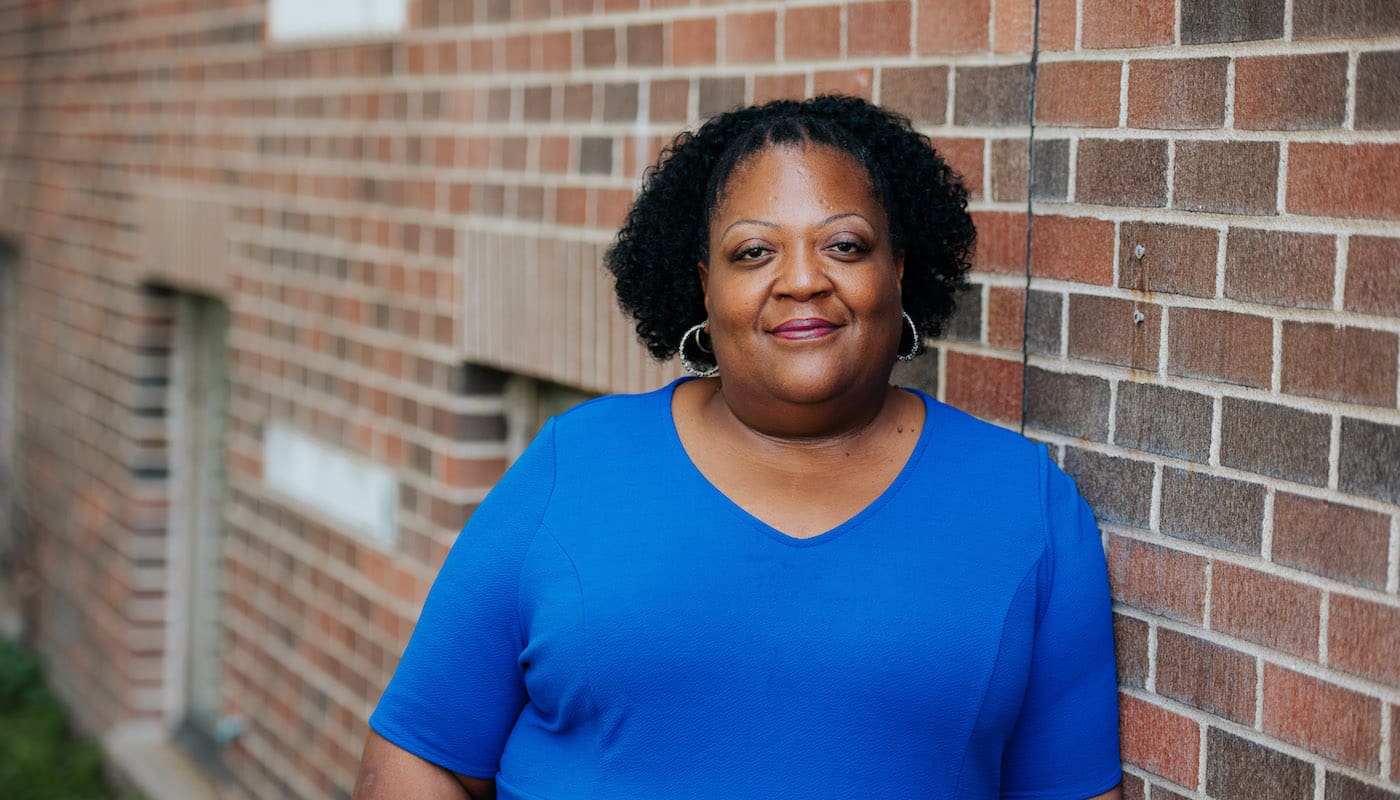 In this installment of our Meet the Merchant series, we talk to Gladys Harrison, who owns Big Mama’s Kitchen and Catering in Omaha, NE. Big Mama’s gained international recognition through its appearance on Diners, Drive-ins and Dives and several other major TV programs. Gladys talks about how Big Mama’s embodies her mother’s passion for food and community, and how Clover has helped her business stay creative through challenging times.

Clover: Hi Gladys! Can you tell us about Big Mama’s Kitchen and how the restaurant got its name?
Gladys Harrison: We’re a family-owned business in Omaha, Nebraska. Big Mama was my mother, Patricia Barron. When my mother became a grandmother, she did not want to be called grandma; she told her grandchildren to call her “Big Mama,” a common term for grandmother in many African American families. She was an amazing woman who had a true passion for food and compassion for people. She was born at home here in Omaha in 1942. Big Mama’s passion for cooking came from her grandmother Lillie, who taught her how to make biscuits on a wood burning stove when she was only six years old. The biscuit recipe that my mom learned from Grandma Lillie is the one that we still use at our restaurant, in addition to hundreds of other recipes handed to Big Mama from her grandmother.

My mother joined the United States Navy after high school and wanted to be a cook, but when she enlisted in 1960, women were not allowed on ships, so she became a bookkeeper. After four years in the Navy, she came back to Omaha and attended culinary school with the dream of opening a restaurant. However, the responsibilities of being a wife and mother of a growing family lead her to a career with a local communications company where, over the next 30 years, she climbed the corporate ladder.

Ever since I can remember, she also ran a catering business out of our house. She started out making beautiful cakes of all sorts and her home-based business grew from there. After working 30+ years in the communications industry, Big Mama retired and began to pursue many of the goals she had in life: she was a missionary in Africa and had a short-lived career as a clown at birthday parties for her grandchildren. Once my youngest sister was grown and married, my mom, at the age 62, finally set out to open a restaurant. We began by selling meals out of her kitchen on Saturdays. Guests could pick up their meals to go or grab a seat at the table in her kitchen. Hence the name of our restaurant, “Big Mama’s Kitchen and Catering.”

Clover: How did the catering business grow into a full restaurant?
Harrison: Our church invited us to set up in the parsonage, where we operated part time on weekends and during the summer. Then we were approached by an organization looking to revitalize the neighborhood around a former school for the hearing impaired that had closed years before. My mother was hesitant at first because it was an unusual location, a gated campus that looked and felt like a college campus in the middle of a neighborhood. After a little coaxing and prayer, she decided to go and check the place out and fell in love when she walked into the kitchen, which was huge. It was set up as a production kitchen where hundreds of meals were prepared daily for the students who used to go to school there.

Big Mama wanted her customers to feel like they were enjoying a meal at grandma’s house. The problem was we were opening a restaurant in an old school cafeteria. One of my sisters, who had an eye for interior decorating, transformed the lunchroom into a warm, comfortable space by decorating with family pictures and knick knacks from my mom’s house that she had accumulated over the years. This, along with the leopard and yellow tablecloths and the home-cooked meals truly made it feel like Big Mama’s Kitchen. That was the original location which we opened in December of 2007. It was unique, not only because of its location, but also because when you think of soul food, you do not think of Omaha, Nebraska.

Clover: Your business really took off when you were featured on Diners, Drive-ins and Dives. How did that happen and what was it like?
Harrison: Big Mama was a huge Food Network fan! She was watching the network long before it became the popular channel that it is today. About six months after the restaurant opened, customers of ours wrote into the show. Sometime later, we got a phone call from the production company asking about our story, as they were coming to Omaha to feature local restaurants. A few weeks later they informed us we had been selected to be featured on the show. Had it not been for that show, we would have closed. We opened our restaurant during the middle of a financial crisis, and our location was hard to find. But Diners, Drive-ins and Dives did such a good job of capturing the essence of our restaurant and my mom’s passion for food that 13 years later it is still bringing visitors to us from all over the world.

We were featured on other shows as well, and we even filmed our own reality show that never got picked up. It was called “Big Mama’s Kitchen.” They told us we did not provide enough drama.

Clover: That might be a compliment! You relocated just before the pandemic hit. How has that been?
Harrison: We were in our original location for 12 years. About five or six years ago, we were presented with an opportunity to be involved in the redevelopment of North Omaha, which has a rich history of African American culture. But, like so many urban areas across the country, it had been neglected for decades. In January, we moved into our new location at the Highlander Accelerator in the center of a purpose-built neighborhood that was formerly a housing project. We have a brand-new restaurant that is absolutely beautiful. My mother helped with the design, but she died in 2018 from chronic lymphocytic leukemia, so she never got to see the new restaurant completed. Even with cancer, she worked every single day—ten, twelve hours a day—until about a year before she died, when she just could not physically work anymore.

We were doing really well early this year, gaining momentum in our new location, and then the coronavirus hit. It was March the 8th when I first noticed sales began to decline. By that Sunday we had only made $100 during a shift as our city had begun to shut down. I made the decision the next day to lay everyone off. We switched to carry-out only, and my daughter and I worked the next three weeks to earn enough money to pay employees their last paycheck. The restaurant was not only my means to make a living, but also where my employees work so they can eat and pay their bills, too. I did not want to leave them hanging.

In April, we closed for a month like most other restaurants. By the grace of God, we received the PPP disaster loan and that is how we eventually reopened. We had to buy new food and masks, thermometers, hand sanitizer—all these things to keep everybody safe. Keeping up with cleaning created more expenses on our part. When we reopened, we brought back the same number of positions we had before, plus more to take up cleaning.

Since then, we have been pivoting and pivoting, and we pivot some more. We expanded our catering service. We partner with various organizations in the community to help feed families, since so many people are out of work. We offer what we call COVID-19-friendly business boxes. Some employees have trickled back into local businesses, so we provide box lunches with everything inside—food, utensils, condiments—for delivery or pickup in our parking lot.

In the beginning of the pandemic, I wanted to figure out what we could do to help the people who live around us. So, we started doing take-and-bake meals at affordable prices where we prepare an entree, a side dish, and include a bag of our cornbread mix for customers to bake at home. We are also selling staple ingredients like flour, eggs, and milk in small quantities. Clover gives us that flexibility where I can add new products to our payment system as fast as I can type them in.

Clover: How have you been using Clover during this time?
Harrison: Clover has been absolutely wonderful with the services it provides. Clover has really allowed us the flexibility, tools, and technology to be able to keep up with what is going on. I have always wanted to do online ordering, but it was always so complicated. Now we use Orderspoon, a third-party app through Clover. We use another app called Davo to collect and file taxes, which has been huge. I always used to pay our taxes late and wound up with fees; now I do not have to worry about it. Clover devices also make it easy for customers to swipe their own cards, so we can reduce contact. And it has been so helpful being able to see our sales figures in real time, so we can figure out when and how much to cook and cut down on waste.

Getting Clover truly was the best business decision I ever made. All the many benefits I get from Clover allows me to focus on what I need to focus on, which is making sure that we are providing our customers with great food and great service. As I figure out ways to do that during a pandemic, Clover has been a lifesaver for us. Clover allows me the ability to see what is going on and manage my business from anywhere. My time is my most valuable personal possession, and Clover has given me so much of my time back.

Clover: What advice do you have for other small business owners right now?
Harrison: Pivot, pivot, pivot. Seek creative, out-of-the-box ways to get your product to your customer in a Covid-19 environment. And do not be afraid to try new things. Because of the great tools that Clover provides, we have been able to move and pivot our business just as fast as the industry conditions change. We are finding every creative way we can to provide the folks in our community with great tasting, home-cooked food. The restaurant industry is not going to be the same again, so we are having to make changes based on what our customers want and what the environment of the country dictates.