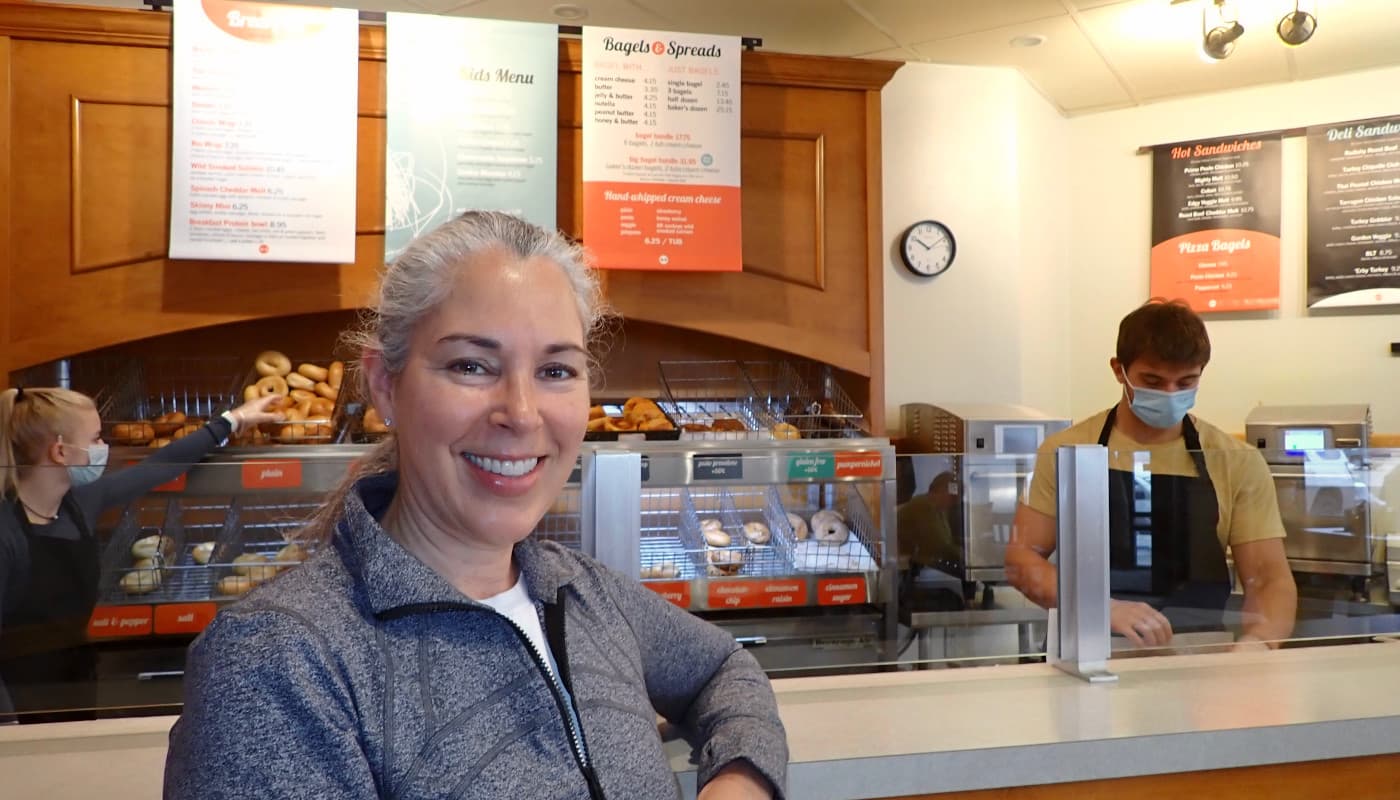 In this installment of Meet the Merchant, we speak to Audrey Ranstead of Bagels & Brew in Fairbanks, Alaska. Ranstead shares how she transitioned her store from a franchise to an independent cafe. She also talks about how her drive-through helped the store survive during the pandemic.

Clover: Hello Audrey! Can you tell us the story of how you started your bagel store in Fairbanks, Alaska?
Audrey Ranstead: Sure! I was born and raised in Fairbanks and I love to travel. In 2005, I was on vacation in Florida, getting ready to go on a cruise. We had several hours before boarding and I went into a bagel store that had a line out the door. We got our bagels and they were really good! Fairbanks is a small community with fewer than 100,000 people and at the time, it didn’t have a bagel store. I thought that Fairbanks needed a place like this.

Clover: You started out as a franchise, is that correct? How did you transition into becoming an independent bagel store?
Ranstead: Yes, I actually reached out to the bagel store I went to in Florida, but they weren’t selling any franchises on the West Coast, let alone Alaska. I ended up partnering with Bruegger’s Bagels, which had never opened a store in Alaska, and I opened my branch in December 2006. I signed a ten-year contract with them and I decided in the last couple years of the contract to transition to my own store, in the same location. Bruegger’s really worked with me and in 2017, we switched. February 28 was our last day as a franchise and the very next day, March 1, we re-opened as Bagels & Brew.

Clover: What makes your bagels special?
Ranstead: We’ve always promoted that we sell kettle-boiled bagels, starting when we were Bruegger’s Bagels and then later, when we switched to Bagels and Brew. If you’re a bagel purist, you know that kettle-boiling the bagels before baking is what makes them authentic and what makes them different from regular bread. We get a lot of tourists in the summer and many come in and they’ll say, “Wow! We’re from New York. We had no idea that we could get a real bagel in Fairbanks, Alaska!”

Clover: We’ve heard about the bagels, now tell us about the “brew” part of Bagels & Brew.
Ranstead: When we switched from being a franchise to Bagels & Brew, it was really fun to be able to finally showcase some of our local Alaskan coffee roasters. North Pole Coffee Roasting, here in Fairbanks, provides our flavored coffees, like hazelnut, French vanilla, and our seasonal flavors, like coconut. For our house blend and our dark roast, we use Raven’s Brew, which is based in Sitka, Alaska. And for our espresso, we use locally roasted SilverHook espresso beans from Kaladi Brothers, from Anchorage. So I work with three different Alaskan coffee vendors and that makes me very happy.

Clover: How did you get connected with Clover?
Ranstead: When we were a franchise, we used their proprietary POS system. When we switched to Bagels & Brew, I called my local bank and asked who they recommended for credit card processing and they recommended Clover. This was in winter of 2016. In Alaska, we only have about four hours of daylight during the winter. It’s constantly dark up here. So I remember driving home, and it was dark, and I called the Clover rep at about 5:00 PM and I told her my story. By the next morning, she had guided us through the process and we had ordered all the equipment. It was very easy.

Clover: Which model do you have? How does it help your business?
Ranstead: We have two Clover Stations. The thing I really appreciate about running my own business and using Clover is that we can update our menu and our prices in an instant. When I was a franchise, if I wanted to do a price increase, I had to fill out this huge form, submit it, and then it would take two to three weeks for them to update my prices. That was very frustrating. I thought, “I can do it on my own, and I can probably do it better if I break away from the chain.” And it’s proved to be true. Clover is so easy to use and we can update everything ourselves.

Clover: How has the pandemic affected Alaska?
Ranstead: Alaska is different from the rest of the country because of our location. If you drive up to Alaska, you have to drive through Canada and they pretty much locked it down.

Besides flying or driving, the only other way to get to Alaska is on a cruise ship. The cruise ships completely stopped. To give you some perspective, the entire state of Alaska has under a million residents and pre-Covid, the cruise ships and airlines would bring 1.5 million tourists up here every summer. Tourism is a huge deal up here.

Clover: How did the local economy and residents cope with the loss of tourism?
Ranstead: Alaskans are pretty resilient. Some of the tour outfits stayed open last summer and they were promoting great deals to locals. So for us locals, in a way, we liked it. In Fairbanks, we’re two hours away from Denali National Park—I go to Denali a lot in the summer and it was like a little ghost town. It was sad to see a lot of places closed, but at the same time it was like a playground for us locals. There were definitely good and bad aspects.

Clover: What were some specific challenges you had as a result of the pandemic?
Ranstead: One of the challenges is getting fresh produce. It’s a very long journey to get food to Fairbanks. So when many of the restaurants were closed, our food distributor was sitting on a lot of produce that was going bad and they would try to sell us shipments of rotten tomatoes and rotten lettuce! I got really mad and I said, “I’m not accepting this. You can’t unload your rotten stuff on me.” So we had to go to local stores daily to buy tomatoes, lettuce, onions, and everything else, and we were paying retail prices.

Clover: How is your business doing now? How were you able to thrive during this difficult time?
Ranstead: We were able to pull through because of money from the CARES Act. I qualified for three different types of funding through the CARES Act, including some that was specific to Fairbanks and Alaska. If I didn’t have the CARES money, it would have been a different story.

We’re located in a building that’s part of a big shopping mall and our drive-through line can hold about three cars comfortably. When the mall was shut down, we would have a line of twenty cars weaving through the parking lot, which worked because there was nobody shopping at the mall. So we weren’t holding up traffic. Our staff would run out to take orders. It was actually kind of fun. We made the best of a bad situation. We’re also near Fort Wainwright, an Army base, and Eielson Air Force Base, both of which have a lot of military and air force personnel. Fairbanks is the closest hub for everyone on the bases, so we’ve actually been in a good place economically. We’re back to basically 100% of business compared to last year. Thank God for the drive-through.

Clover: Do you have any final thoughts for us about running a business during the pandemic?
Ranstead: One of my friends does motivational speaking. He said, “Resilience is like a rubber band. It stretches and then it contracts back.” That inspired me, because I know that as a small business owner, I get overwhelmed because I’m responsible for 21 employees and a lot of vendors, and of course, my customers! There’s a lot of pressure on me and every other small business in the United States. So I think about the rubber band metaphor and I remember how my friend said, “You’ve got to stretch sometimes to make things work. And when it works, then it goes back and you’re back on track.”