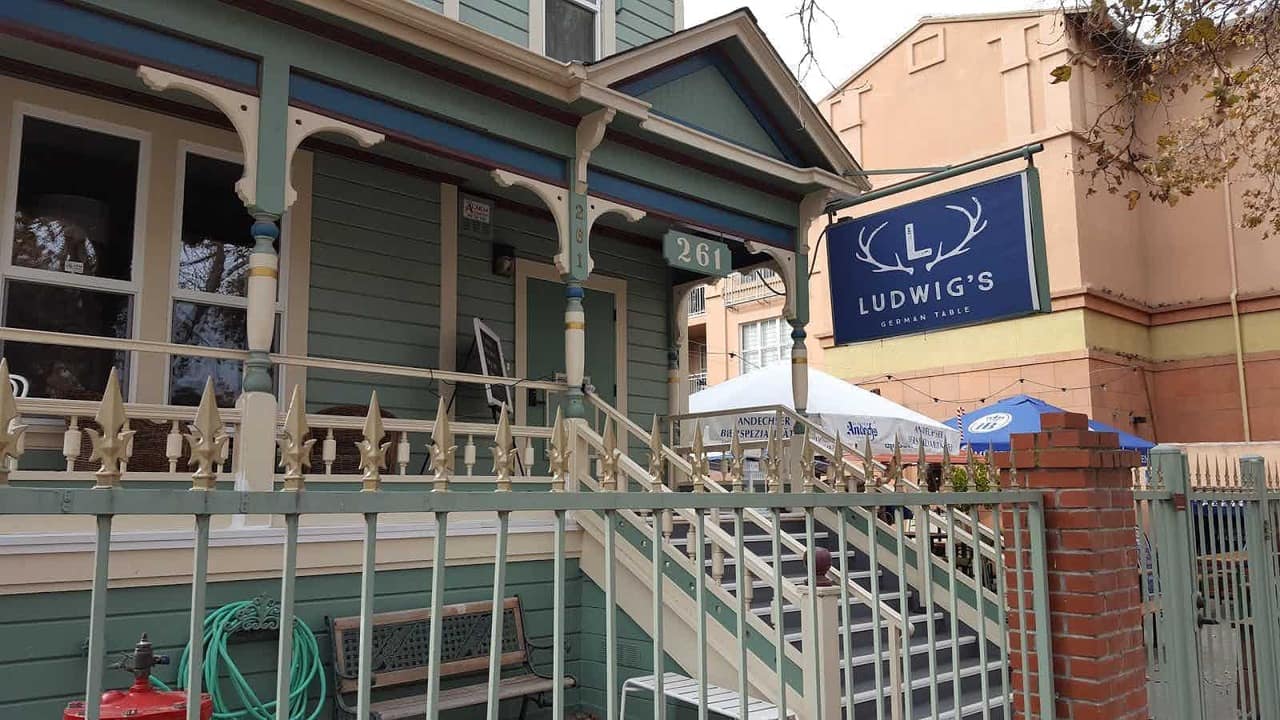 We’re launching Meet the Merchant—a Q&A series with real-world Clover merchants. We share best practices, lessons learned, tips for getting the most out of your Clover POS system, and more.

Meet Nicole Jacobi and Ben Bate, co-owners of Ludwig’s German Table in San Jose, California. Both are immigrants: Nicole hails from Germany, Ben from England. They joined forces to open Ludwig’s in 2016. Since then they’ve flourished in their original location, with plans to expand to a second restaurant in Mountain View. As first-place winners of the CloverAchievers contest, the Ludwig’s team has leveraged their Clover system in several ways to help the business grow. Here’s their story.

Clover: How did the idea for Ludwig’s German Table come about?
Ben Bate: Nicole and I met through my brother-in-law, by chance. I just moved to America and Nicole ran another business, running the cafe at the local children’s museum. We started talking and I did some work in her kitchen. One day she asked me whether I had any interest in starting a biergarten. We went and looked at a historic location, the King Conservatory of Music. Nicole had a friend that was part of the club that owned the building. It just felt right and we went for it. We signed a 10-year lease and opened up Ludwig’s.

We designed it ourselves and installed the beer draft system. Here we are three and a half years later. We’re in the process of opening a second location in an area with more foot traffic.

C: What have been some of the challenges of setting up a biergarten in a California town?
BB: Apart from the obvious like finances and staffing? We’re [neighbors with] companies like Google and Facebook who can pay dishwashers a lot of money and can give health benefits to their families. It’s extremely expensive to give healthcare to a large group of people, so we try to attract good people and incentivize our staff in other ways.

But beyond staffing, one of the tougher parts about opening a biergarten was trying to get customers to accept communal dining. In Europe, it’s pretty normal to share your table with strangers. When we first opened, trying to get people to share their table was hard, and we only had two high-tops that fit two seats each. People used to wait for those two small tables, and only the larger groups were sitting at the communal tables.

But we stuck to our guns. This was part of the dining atmosphere we wanted to create. Communal seating encourages conversation. We didn’t want a cookie-cutter, sterile restaurant environment where you get rushed out. We wanted people to sit and enjoy themselves. We have a selection of board games for people to play together, which gives Ludwig’s a bit of an English pub feel too.

Eventually we got rid of those smaller tables and made everything communal. Now people love it! We had a group of 30 just last night.

C: What was the easy part?
BB: Don’t think there was an easy part (laughs).The easy part was that it came naturally for me and Nicole. We wanted a space where people could come and celebrate and make their memories. So that bit comes easy. 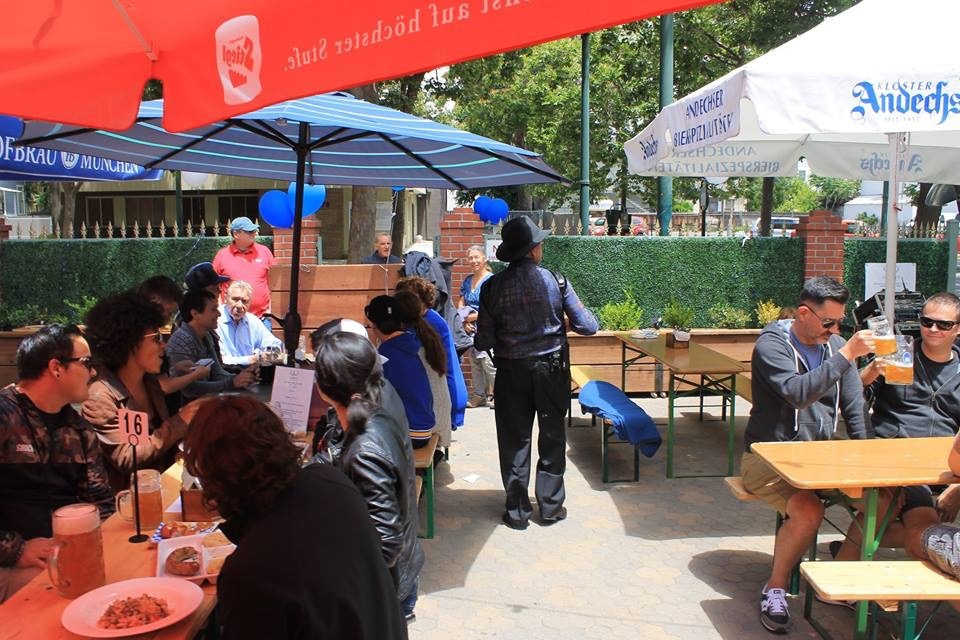 C: How does Ludwig’s German Table fit into your local community? What impact do you feel the restaurant has?
BB: We’re on the residential side of downtown San Jose in a historic building. We’re a little bit off the beaten track, which has ups and downs obviously, but we have a number of regulars. We’re building a family here. They come on their birthday, or they come when they just need to see someone, or when they need a place that is welcoming.

The whole feeling of community radiates outward from you as the owner. One customer said to me last Christmas: “Ben, you know you built something here and it got me through a hard time. I can’t thank you enough for being here.” That was the moment that I thought: I helped that one person get through a difficult time in his life. If I do nothing else with this restaurant, this is it.

C: You’re known for your passionate dedication to customer service. What does it mean to you when people walk through your doors?
BB: People have such a massive choice in dining options right now. It’s expensive to go out to eat. If they go out, they’re coming out for the experience. I always tell my team: when someone is willing to give us money to spend their time with us, we need to take great care of them. That’s the key—take care of people. If you mess up, be honest about it. Tell them what’s going on, and nine times out of ten that person will come back. It’s that simple.

C: What would you say is your most popular dish?
BB: Wiener schnitzel! Everything is made fresh in-house, including our deserts, the dressings, the sauces. We pickle our own vegetables. I believe the effort that we put into making the simple things good has really helped us, too. Nothing is sitting around getting bad, and nothing comes out of a bag. We get our sausages from a local butcher who has been doing it for 40 years. Those are the kinds of things that allowed us to build such a reputation in a short amount of time.

C: What’s your most popular beer?
BB: The Märzen, which is an Oktoberfest-style beer. Before we offered that, it was the German Pilsner. Another of our bestsellers was the Weltenburger. That’s still brewed by monks in one of the oldest breweries in the world in Bavaria—it was founded in 1050 AD.

C: Nicole has a history with Clover that precedes Ludwig’s. Can you tell us about that?
BB: Nicole took over what was a very basic café at the Children’s Museum, and she actually created a healthy concept café. They scrapped the fryers and put in a rainbow station of colorful fruits and vegetables so the kids could create a bento box of nutritious foods. She used the Clover Station, and it worked really well.

When we started up Ludwig’s, we couldn’t afford a $20,000 POS system. So we brought over the Station and made it work for the new business.

C: What was your first impression of Clover?
BB: It’s very intuitive. For a café the Station terminals worked great, but for a bar where people are running tabs and some customers want to cash out early, we wanted something more mobile. We have great communication with Clover and found the right solution. The service was really one of the biggest things that kept me wanting to work with Clover: that feeling of being taken care of. My opinions being taken into account—I like that a lot.

C: How has Clover performed for you overall?
BB: It’s definitely helped our business. Staying with Clover has paid off, and I’ve gotten such good support. 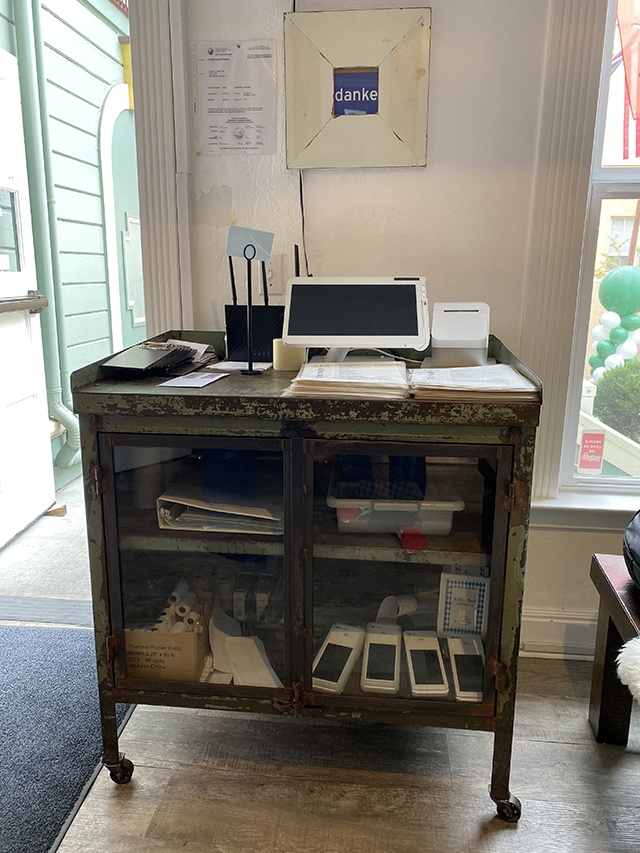 Clover’s part of the family at Ludwig’s

C: You mentioned the Clover Flex. What Clover devices do you have now, and how have you set them up?
BB: Right now we run Clover Dining with four Flex devices and two Stations. The outdoor biergarten is 1,600 square feet. The dining room is 1,200 square feet and the event hall is another 2,000 square feet. So it’s a huge space that we’re trying to cover, and having multiple Flex devices has made a big difference. Before, the server did a lot of running back and forth and that whole process was killing so much time. You forget a pen and have to run back, or someone stops you as you pass. Customers used to get frustrated, and service quality was dropping. That was the key reason I wanted a mobile POS solution. With the Flex guests can check out at the table, which saves so much time.

So that’s how we use the Flex devices, to cover three dining areas. We also have a Station at the bar and another at the rear exit.The bar is a contained space, and the bartender literally stays there most of the night. It makes sense to have a terminal there with a cash drawer underneath. But it also makes sense to have a Station because if you want to look at Homebase and check out employee scheduling, or make changes to the inventory it’s just nice to do that on the bigger screen. It’s a totally different use for the Station.

C: Have you or your staff found specific apps or features they particularly like or use a lot?
BB: We use Homebase [Schedule] for employee scheduling. The staff like it, and I like it. We run our restaurant on Clover Dining, and we also use Inventory. 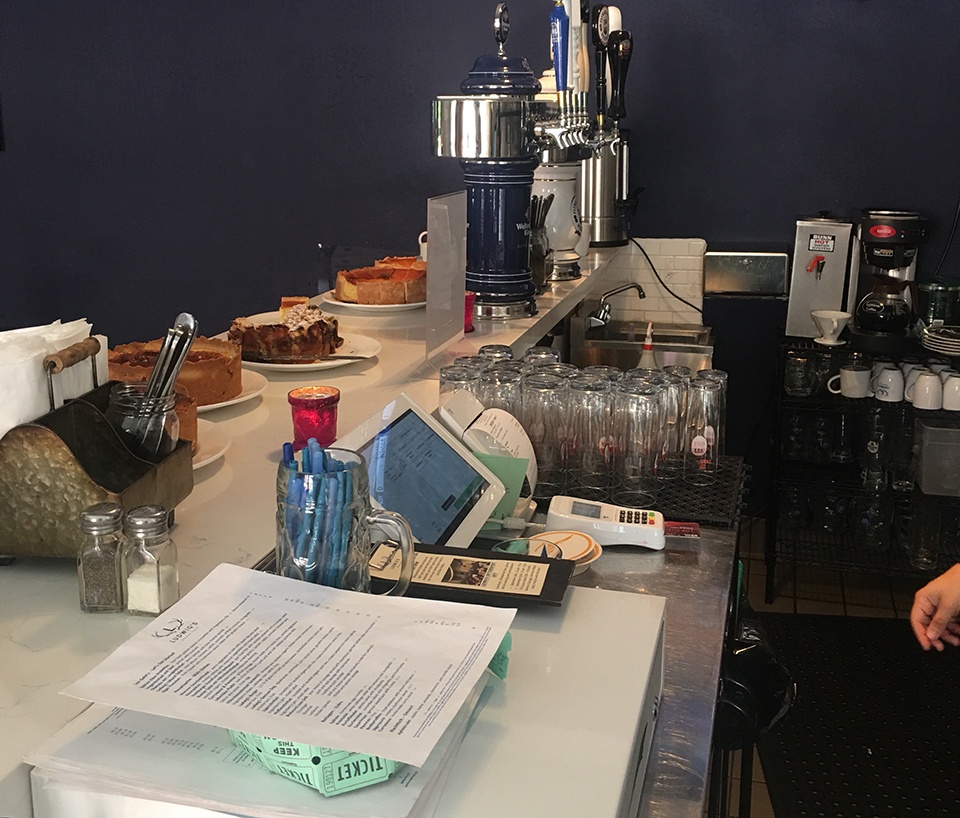 C: Do you use Clover Scan to Pay? How has it helped?
BB: The Scan to Pay app is brilliant. It’s enabled me to cut my staffing costs and improve service, since we don’t need nearly as many servers on the floor. Now servers can print the check, give it to the customer and spend five seconds explaining how to pay it. You simply pull out your phone, open your camera, hover over the bar code, and it will tell you how to do the rest. It’s so easy.

Scan to Pay also includes the gratuity, so servers at the end of the night don’t have a lot of checks they need to go through. It’s already done. The customers find it intuitive to use and they’re enjoying using it.

I love the Flex, I love Scan to Pay, they’re both great. I always wonder why no one else has done it, or done it sooner. In Europe we’ve had tableside and mobile payments at restaurants for years. I’m happy that Clover did.

“Scan to Pay is brilliant. It’s enabled me to cut my staffing costs and improve service. And it’s so easy.”

C: You’re opening a second location. How’s that coming along?
BB: Yes, in downtown Mountain View, California. We’re still putting in plumbing, but it’s a gorgeous location and a prime spot for foot traffic. The sunsets there are perfect for outside dining. The street shuts down often for arts and crafts and wine festivals. It’s perfect for outside drinking and dining.

This second location is smaller but foot traffic is better, and managing the space is going to be a lot easier. We intend to use the Flex on the floor and have a few terminals at the bar. We can’t wait.

Make your restaurant unforgettable. Discover what Clover can do for you.